Syrian Prime Minister Imad Khamis said that this plan was to ensure an organized reconstruction and to secure the return of people to their homes reports Zaman Al Wasl. 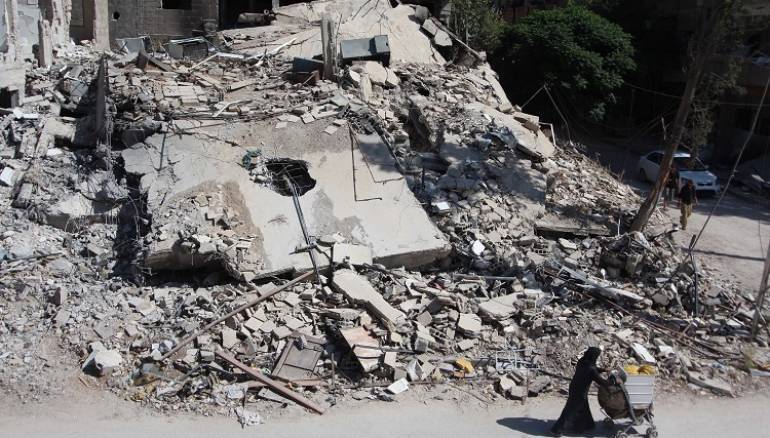 Syria’s Prime Minister, Imad Khamis, gave his cabinet and mayors two months to remove “violating and damaged” buildings in Damascus’s suburbs. Such a decision reflects the regime’s thirst for more property control, secured in what appears to be a ‘legal act’, local activists said.

Al-Watan, a pro-regime newspaper, reported that Khamis called for intensifying the efforts and steps of the ministries and concerned institutions and the development of an executive work program starting with Ayn al-Fijah, Ayn al-Khadra, Bassemeh, Yarmouk, Jobar, Qaboun and Barzeh.

The newspaper pointed out that during the meeting, Khamis stressed the “removal of all violations in the areas populated without a license,” pointing to the existence of associations and buildings that have been built despite being guilty of infringements, so they will be, “re-settled by the governing laws, and within the conceptualization of regional planning.”

Khamis also called for the removal of all infractions in the areas, claiming that his system seeks to return the displaced to their cities and towns, revealing that, “there is an organized plan and that acquisitions during the spring are a red line.”

Khamis gave two months for invalid buildings to be removed so “areas are not renovated in a random manner.”

Khamis commissioned the General Housing Establishment to study a proposed residential neighborhood to compensate the owners of real estate acquired in the immediate compound of the al-Faija spring. The General Company for Technical Consultations and Studies was commissioned to complete a new organizational plan for the areas of Ayn al-Faija, Bassemeh and Ayn al-Khadra.