The Foreign and Expatriates Ministry has said that the Syrian Democratic Forces have violently suppressed the protests of citizens in Deir ez-Zor reports The Syria Times. 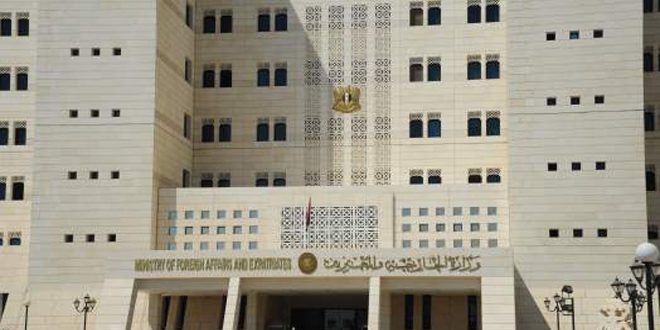 Syria has called on the Security Council to shoulder its responsibilities by working to stop the attacks and treasonous actions of the Syrian Democratic Forces (SDF), which are backed by the US and other Western states.

In letters addressed to the UN Secretary-General and the head of the Security Council on Monday, the Foreign and Expatriates Ministry said that the recent massacres committed by the SDF in the countryside of Deir ez-Zor, in collusion with the US-led International Coalition, seek to subjugate Syrian citizens who are demanding their rights and demanding that the Syrian state resume carrying out its duties in the area.

The Ministry said that the SDF militias responded with violence to Syrian citizens’ demands for improvements to the educational sector and provisions of food and water in the impoverished area, killing locals and destroying infrastructure.

The letters noted that protests by Syrian citizens against the SDF broke out in several areas in Deir ez-Zor province as well as south of Hassakeh city.

The Ministry said the actions of the SDF and their shameful alliance with Syria’s enemies prove without a doubt their criminal and terrorist nature, and that they do not express the will of the Syrian people, stressing that the massacred committed by the SDF will only bring them disgrace and the contempt from the Syrian people.

The letters calls on the Security Council to compel the US and other Western states to respect Security Council resolutions that assert Syria’s sovereignty, independence, and territorial integrity.

The Ministry concluded the letters by saying that Syria reasserts its legal right to defend its citizens across the country, citing paragraph eight of Security Council resolution no. 2254, which gives Syria the right to confront actions carried out by terrorist groups, establishments and entities that seek to undermine Syria’s unity.