The Syrian National Coalition has warned that if the assault on Idleb continues, it could lead to a humanitarian tragedy and a fresh wave of refugees towards Europe. 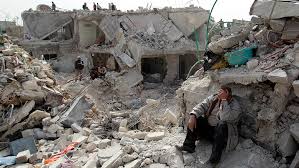 President of the Syrian Coalition, Abdurrahman Mustafa, called on the international community and the major players in Syria to put an end to the Assad regime and Russian onslaught on Idleb, adding that Russia is still refusing to abide by the agreements in place and seeking to “shore up the Assad regime.”

President Mustafa warned of dire consequences affecting the whole world should the Assad regime and its allies try to storm Idleb province. He also warned of, “the humanitarian tragedy resulting from the targeting of civilians and of a fresh wave of refugees towards Europe.”

“The Russians insist on pursuing a military solution,” President Mustafa said, noting that this places increased responsibility on the major players to maintain the ‘de-escalation zone’ agreement as the last remaining agreement in place.

President Mustafa described the ongoing military escalation as “extremely grave,” pointing out that it is targeting children, women, civilian infrastructure and hospitals. He stressed that this is the same policy Moscow has pursued since the start of its direct intervention in 2015, targeting the revolution’s social base as it previously did in Aleppo, Dara’a and many areas across Syria.

The Assad regime, Russia and Iran are still using the strategy of relentless bombardment in Idleb, displacing tens of thousands of civilians towards safer areas, President Mustafa said.

President Mustafa pointed out that: “Russia has not complied with any of the agreements reached on Syria and has limited its military goals to the propping up of the regime.”

Moreover, President Mustafa pointed out that the Coalition is working in coordination with Turkey as a guarantor of the Idleb agreement to overcome the Idleb crisis and as Turkey has military observation points in the region. He noted that the tasks of those points are not limited to monitoring as they represent a deterrent, impeding any regime advance into Idleb.

The regime forces’ targeting of the Turkish observation points was aimed at exerting pressure on Turkey, to force it to make political concessions in other files as it is an influential state and open to dialogue with all major players.