During recent fighting against opposition forces in the Hama countryside, Liwa al-Quds lost a number of it fighters, some of whom had been part of reconciliation deals writes Al-Modon. 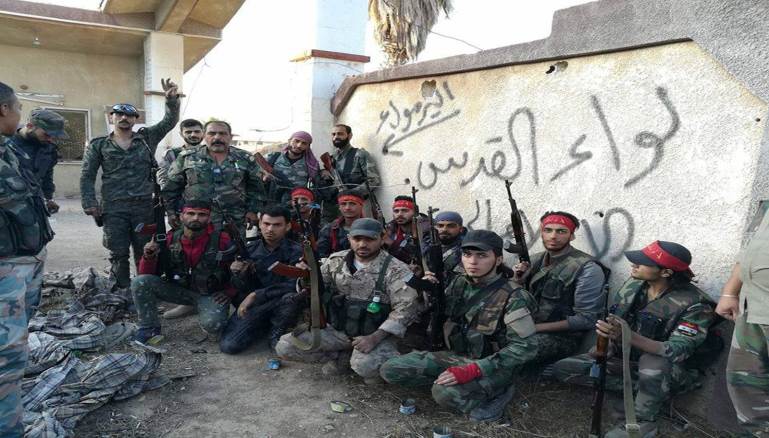 The Liwa al-Quds militia has lost a number of fighters on the Hama countryside fronts over the last few days, after they took part in fighting the opposition alongside the Fifth Corps, which is leading land operations.

Among those from the Liwa al-Quds who were killed were “reconciliation” fighters from the Damascus countryside and Palestinian refugees, as well as veterans of the group from Aleppo city. According to the Action Group for Palestine, the Palestinian refugee Faiz Khalid Samour died while taking part in the fighting against armed Syrian opposition groups in the northern Hama countryside. He was from the al-A’ideen camp in Homs. Another number of the group’s fighters were killed in a battle with the opposition in al-Shreea, Bab al-Taqa and Jeb Suleiman in the Sahel al-Ghab.

Mohamed Heiba was killed on May 12, 2019, in Sahel al-Ghab after a groups of militia fighters were ambushed by opposition fighters. He was from Barzeh in the Damascus countryside and was a volunteer in the Liwa al-Quds and was previously a member of Jaish al-Islam in the Barzeh district, and was among the opposition fighters who remained in the Barzeh and al-Qaboun districts after the “reconciliations” with the regime in May 2017.

In 2018 and 2019, Liwa al-Quds has managed to conscript more than 150 fighters following reconciliations in Damascus and eastern Ghouta. The volunteers coming from Damascus and Ghouta have been subject to, along with volunteers from Aleppo, various military training overseen by Russian officers in the Handrat base north of Aleppo in the first quarter of 2019.

Liwa al-Quds fighters from the Damascus countryside, are led by Abou Yassin Mandou, a former commander in Jaish al-Islam, who is credited with recruitment for the Liwa. His brigade, supervised by the Fifth Corps, has been stationed in the Karnaz area in the northern Hama countryside since the start of April. Following the beginning of military operations in the Hama countryside the number of fighters on the front has reached 300 after reinforcements arrived from Aleppo.