The United Nation’s High Commissioner for Refugees has said that issue of refugees should not be politicized reports SANA. 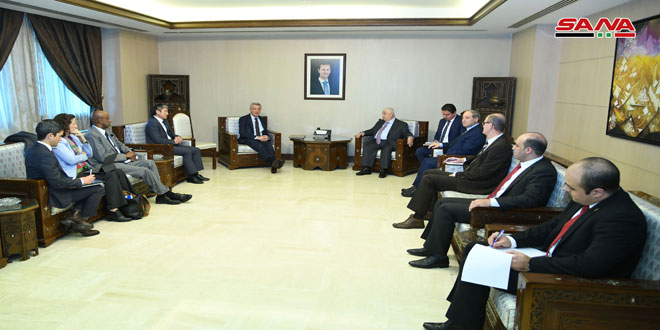 On Tuesday, Deputy Prime Minister and Foreign and Expatriates Minister Walid al-Muallem received the United Nation’s High Commissioner for Refugees, Filippo Grandi, and the accompanying delegation. The two sides discussed means of boosting the standing cooperation between the Syrian Government and the Commission.

Muallem reviewed the great efforts and the important steps taken by the government to facilitate the return of the refugees and guaranteeing the improvement of their living standards particularly after the achievements of the Syrian Arab Army in liberating many areas of terrorism whether through military operations or by reconciliations, which led to the return of many displaced families and refugees to their villages and towns.

He stressed the government’s keenness to cooperate with the Commission to preserve Syria’s sovereignty and territorial unity.

Muallem clarified that the Syrian state renews its call for Syrian citizens who were forced to leave the country to turn back, stressing that this issue is a top priority as the state is keen on restoring the infrastructure to the liberated areas.

At the same time, the Minister highlighted the importance of humanitarian organizations and the international community assuming their responsibilities with regards to securing the requirements for the return of refugees, on top of lifting the unilateral illegitimate cohesive measures imposed on the Syrian people, which are pressuring Syrians to leave the country in pursuit of a dignified life.

He also expressed his appreciation for the efforts exerted by the Commission, in cooperation with the Syrian Government, in providing aid and humanitarian assistance.