The convoy, was stopped by the US-linked militia of Qasad, and prevented from continuing its journey, despite the desperate need for aid in the area writes SANA. 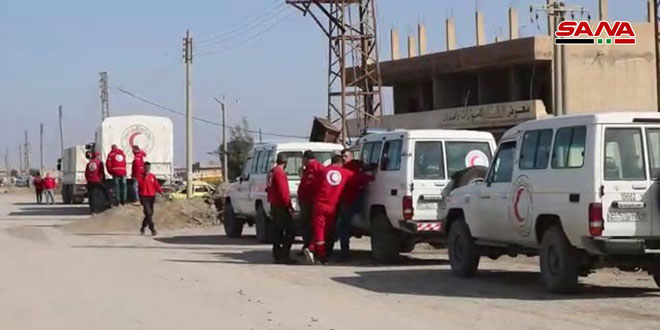 US forces and the US-linked militia of Qasad prevented a humanitarian relief convoy, provided by the Syrian government and the Syrian Arab Red Crescent, from reaching locals in Hajin city in Deir ez-Zor’s countryside, on the eastern bank of Euphrates River, SANA’s reporter said.

The convoy of 10 trucks loaded with potable water bottles, medicine, personal hygiene supplies, and other basic commodities, were prevented from crossing into al-Husseiniya village by the militia of Qasad, as instructed by the US forces in the area, the reporter indicated.

The reporter added that this measure contradicts international law and shows the US’s indifference to the humanitarian situation and the falsity of its claims regarding its intentions to protect the lives of the Syrian civilians, who have been subjected to systematic and repeated airstrikes by the US–led coalition.