Hassan Nasrallah said that the Syrian army and its allies were more than capable of winning a battle in northern Syria reports SANA. 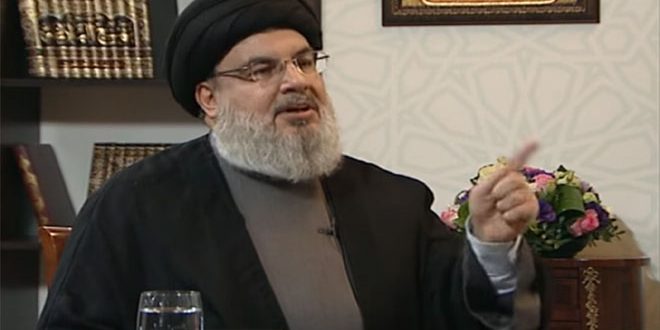 Hezbollah Secretary General, Sayyed Hasan Nasrallah has confirmed that Syria is in the final stage of achieving a great victory over terrorism.

Nasrallah, in an interview with al-Mayadeen on Saturday evening, said that Syria today is at its best, comparing to the situation in 2011, and talked of a very great victory, as Syria reached the final stage in the war on terrorism, stressing that the Syrian Arab army and its allies are able to win the battle in northern Syria .

“The Syrian state announced that options are open regarding Idleb and the priority is for the political solution,” he said, calling on the Turkish regime to fulfill its obligations under the Sochi agreement on Idleb or else leave the issue for the Syrian government, which will not leave its land to the terrorists.

Nasrallah stressed that withdrawal of US from Syria means the failure and defeat of Americans, pointing at the same time to the failure of Israel’s schemes and the loss of its terrorist tools in Syria.

He emphasized the resistance’s high alert to encounter any Israeli aggression in Lebanon, where it possesses the sufficient number of precision missiles, saying that occupied Palestine will be a battlefield for any war that will take place.