For the second time in a week, and despite claims of their destruction by the US President, ISIS has attacked American forces in Syria reports Alsouria Net. 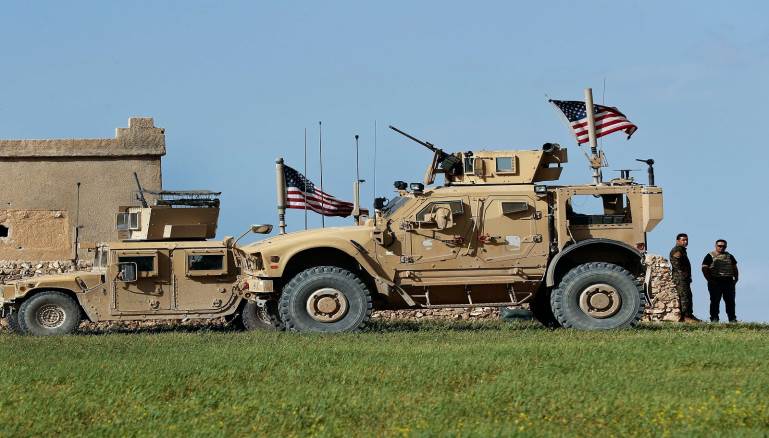 The Islamic State (ISIS) has vowed to carry out more attacks against American forces operating as part of the International Coalition in Syria, after the group claimed a suicide blast that struck American and local forces, the second blast to hit in less than a week.

On Monday, the Agence France-Presse news agency quoted jihadist accounts on Telegram as vowing to, “whiten the hairs on the heads” of American forces and their allies, and saying that “what happened to them in Hassakeh and Manbij is only the beginning.”

In a statement on Twitter, the International Coalition said that, “A combined US and Syrian partner force convoy was involved in an apparent VBIED attack today in Syria,” adding that “there were no US casualties.”

The suicide attack struck American forces on Monday, the second in less than a week, which wounded two American soldiers and killed five members of the Syrian Democratic Forces (SDF).

The Syrian Observatory for Human Rights said that the explosion resulted from a suicide bomb, which hit the American convoy that was accompanied by the SDF to protect them during their tour of the area.

The Observatory said that the explosion wounded two members of the American forces and killed at least five of the SDF, while others were also wounded.

A witness told AFP the blast happened as the convoy drove past a checkpoint held by Kurdish forces 12 kilometres outside Shadadi. The witness said he heard planes fly overhead, before the area was completely cordoned off by Kurdish fighters.

After the explosion, ISIS claimed responsibility for the attack. The group’s Ammaq agency said in a statement carried on jihadist accounts on Telegram that, “a martyrdom attack with a car bomb struck a joint convoy of American forces and the PKK (the Kurdistan Workers’ Party) near a checkpoint south of the city of al-Shadadi.”

On Wednesday, a similar attack claimed by the group in Manbij in the north killed 19 people, including four Americans, ten civilians and five SDF fighters.

The attack, which occurred in Manbij in the Aleppo countryside, was  the deadliest attack on American forces, since they deployed in 2015. The city is controlled by the Kurdish People’s Protection Units under the Syrian Democratic Party, or PYD.

Observers believe that the biggest beneficiary of the attacks against the American forces is the SDF, which believes that the end of the American mission and the American president’s intention to withdraw these forces means the end of the “Kurdish” dream of any expansion, while the presence of the forces in the Manbij areas and its environs east of the Euphrates is also threatened by Turkish forces and the Free Syrian Army, which are waiting for any appropriate moment to fill a vacuum in the area.