Geir Pedersen has started his job as the United Nations Special Envoy to Syria with a meeting in Damascus writes SANA. 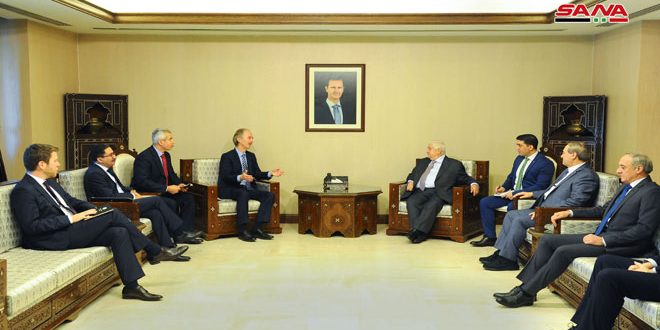 The meeting dealt with the efforts exerted for making progress on the political track of the crisis in Syria and following up the ideas related to the political process.

Muallem welcomed Pedersen to his new post and expressed Syria’s readiness to cooperate with him in his task of facilitating the intra-Syrian dialogue to reach a political solution to the crisis, which serves the interest of the country in a way that leads to eradicating terrorism, ending the illegitimate foreign presence in Syria and preserving the country’s integrity, sovereignty and independence.

For his part, the UN Special Envoy expressed pleasure of visiting Damascus to start his tasks, pointing out that he asked to visit it in order to attentively listen to the Syrian government’s viewpoint.

Pedersen discussed the meetings he is to hold and the activities he is to undertake during the upcoming period, which aims to activate the political process, stressing that this process should be led by Syria, otherwise it won’t succeed.

Pedersen affirmed that he won’t spare any efforts to reach a political solution in accordance to the principles stipulated in the UN Charter and UN Security Council resolutions related to Syria, highlighting the UN’s commitment to Syria’s national and territorial unity, independence, and sovereignty.