A delegation from France, headed by Thierry Mariani, has expressed a desire to create new economic relations with Syria reports SANA. 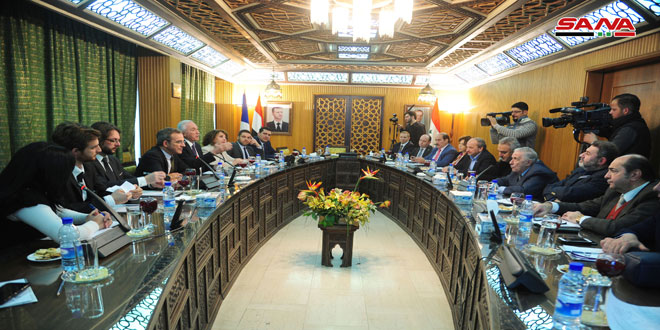 On Wednesday, members of Damascus Chamber of Commerce Board of Directors and a number of Syrian businessmen discussed with former French MP Thierry Mariani and the accompanying delegation means of reinvigorating trade and economic relations between Syria and France.

Head of Damascus Chamber of Commerce, Ghassan al-Qalaa, said France has to rectify its path towards Syria, pointing out the role French businessmen can play in reinvigorating economic and trade relations, by forging partnerships between businessmen in both countries.

The Secretary of the Damascus Chamber of Commerce, Mohammad Hamsho, said numerous European companies have a desire to work in Syria, indicating that the French government has backed terrorism in Syria and is now called on to show good faith and bring back relations to the level of companies and contribute to lifting unilateral coercive economic measures against Syria.

Mariani, for his part, said the majority of French people want to restore bilateral relations with Syria, calling for establishing a French-Syrian association to revive economic ties.

Mariani said Syria has jump-started the reconstruction stage as security and stability had returned to many areas, adding that France aspires to establish cultural ties involving Syria’s heritage.

Commenting on the unilateral economic measures against the Syrian people imposed by some Western states and the EU, including France, Mariani said the stances of the Parliament and international public opinion and the media “are not the same.”