The Peshmerga, who have previously fought ISIS in Iraq, has entered Syria in agreement with the United States writes Ana Press. 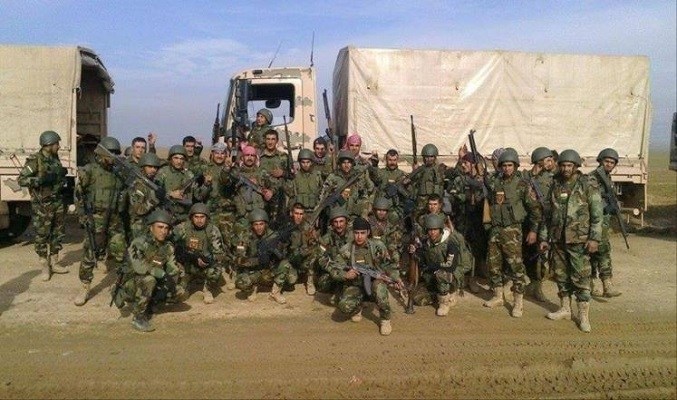 A commander in the Kurdish Future Movement in Syria, Abdel Salam Osman, said that, “a group of Peshmerga have entered the eastern Euphrates area, in agreement with the United States, and specifically into the Dereik area, northeast of the city of Hassakeh.

Osman said during a phone conversation with Ana Press that, “the entry of the Peshmerga was met with heavy opposition from the Democratic Union Party (PYD),” saying that the Americans had forced the matter on the PYD. He said that the PYD had expressed its dissatisfaction with the issue, and that its media apparatus had begun to issue distorting rumors about the Peshmerga.

A commander in the Kurdish Future Movement said, “We believe that this matter is an important step in the right direction, and we reiterate our call for the entry of the Peshmerga Rojava to protect Syrian Kurdistan and protect all its communities.”

The US Special Envoy to Syria, James Jeffrey, confirmed the news that was circulated by some media circles, while the Syrian Democratic Forces (SDF) denied it—specifically the news that the Peshmerga Rojava had entered Syrian Kurdistan, according to the Kurdish Yekiti Media agency. Jeffrey said that, “Peshmerga Rojava have entered Syrian territory to participate in imposing security in coordination with us, and with the knowledge of the SDF.”

The People’s Protection Units (YPG) of the PYD are considered the most important units in the SDF, which is backed by the US-led International Coalition.

The SDF and the YPG denied the entry of the Peshmerga Rojava and said that what had happened was a result of a “malfunction which affected the Seemalka bridge crossing, which forced the military aid convoys of the International Coalition to change their path.”

A foreign relations official in the Kurdish Future Movement, Abdel Hamid Tammo, had previous told Ana Press, “The entry of these forces into Syria requires regional and international permission.” He said that there had been meetings between the Kurdistan region and Turkey around the entry of the Peshmerga into Syria.

According to Tammo, dialogue and discussion over which entry point and which area had been done, whether they would enter with the Euphrates Shield or enter into the areas in Hassakeh province to confront the PYD forces, or delay their entry until the formation of a Syrian national army, and then become part of that for Syria’s future.

Peshmerga Rojava forces are under the authority of the Syrian Kurdish National Conference, and are deployed in the Kurdistan region in Iraq. They participated in a number of battles in defense of Kurdistan’s land against the Islamic State and the Iraqi Hashd al-Shaabi militias. However, the rivalry between Kurdish factions prevented them from being deployed on their land, to ward off internal fighting, according to comments from Peshmerga Rojava officials.