Kurdish infighting has caused many to leave their ranks and join the Syrian army in Aleppo reports Damas Post. 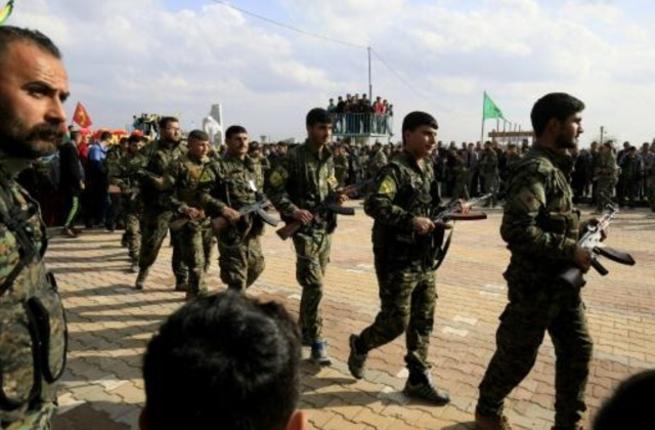 Kurdish sources have confirmed that hundreds of Kurdish fighters have split with the Syrian Democratic Forces (SDF) and have joined the Syrian army in the Aleppo countryside.

The Kurdish National Council has organized protests in Qamishli because of the arrests carried out by SDF security agencies against members of the council, in addition to violations against Afrin’s citizens carried out by armed groups loyal to Turkey.

A commander in the Kurdistan Democratic Party, Ali Muslim, said, “The SDF must stop their harmful behavior. This is not just for the Kurds, but also for other groups that share geography, history and nation.”

The announcement that hundreds of Kurdish fighters are joining the Syrian forces in the north comes at a time when differences are deepening between the al-Jazira Kurds and Afrin Kurds, with the Afrin Kurds accusing Kurdish politicians in the SDF of hypocrisy and leaving Afrin and its proxies in the Euphrates Shield area for Turkey to seize.

A Kurdish politician from Afrin, Rizan Hadou, has more than once declared a state of hostility between them, and what he called a state of “incitement and hatred between the Afrin Kurds and al-Jazira Kurds and Kobani (Ain al-Arab) Kurds,” and that “this behavior was not born of the moment and this artificial strife was not newly-created” but had been established by decades of Kurdish politicians, who have tried to use them in the context of factional disputes or Kurdish political disputes to win party presidencies, or become secretaries or members of political bureaus or central committees.

Hadou added that today some politicians try to resort to this behavior, relying on what he termed “electronic flies,” but that, “there is no problem between the Afrin resident and his brother in al-Jazira. They are both victims of a greater problem and illness, namely the failure and betray of Kurdish parties and politicians.”