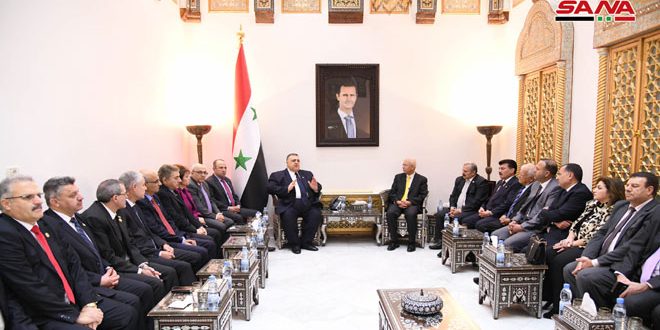 On Sunday, Speaker of the People’s Assembly, Hammoudeh Sabbagh, stressed the importance of enhancing relations and exchanging expertise between Syrian and Jordanian trade unions, to serve the common interests of the two countries in a way that lead to a broadening of bilateral cooperation.

Sabbagh was speaking during his meeting with a delegation from the Jordanian Engineers Association.

During the meeting, Sabbagh said the delegation’s visit to Syria is a true expression of solidarity and support for the Syrian people, highlighting the deep social and kinship relations binding the Syrian and Jordanian peoples.

Chief of the Jordanian Engineers Association, Ahmad al-Zoubi, who headed the delegation, said the association is ready to support the Syrian people during the reconstruction, especially in the fields of electricity and renewable energy.

He voiced appreciation for Syria’s stance that promotes openness to Jordan.