Israeli airstrikes, a Syrian refugee assaulted in Britain, protests in northern Syria and a high civilian death told in November. Catch up on everything that happened over the weekend. 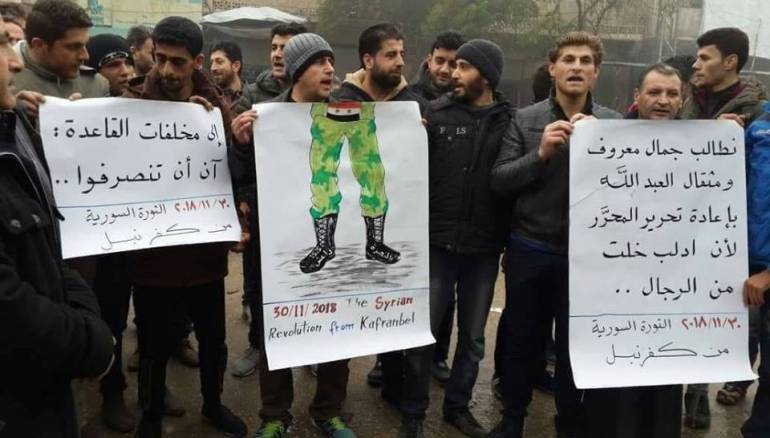 1. On Thursday, Israeli jets bombed several areas near the Syrian capital Damascus as well as in the country’s south, in its first reported strikes in the country since September. “For an hour, Israeli forces bombarded positions in the southern and southwestern suburbs of Damascus as well as in the south of Syria, on the border of Quneitra province,” the Syrian Observatory for Human Rights said. Earlier, Syrian state media reported that a number of “hostile targets” close to the capital Damascus were downed by air defenses.

2. Al-Araby al-Jadeed reported that the family of a young Syrian refugee who was assaulted at his school, and seen in a widely-shared video, said they are considering suing far-right figure Tommy Robinson after he claimed their son had been involved in attacking a girl. Video footage of the attack on 15-year-old Jamal, a Syrian refugee from Homs, went viral on Wednesday, prompting outrage online and an outpouring of support for the teenager. In a video rant, Robinson, who founded the far-right group English Defence League (EDL), took to Twitter to discredit Jamal, accusing him of attacking “young English girls in his school.” Police said they were investigating the attack on Jamal as “a racially-aggravated assault” and had questioned a 16-year-old boy over the footage. The suspected attacker’s Facebook page features posts expressing support for Robinson, a notorious anti-Islam activist.

3. On Thursday, two gunmen on a motorcycle opened fire on a clearly marked convoy, about 50 kilometers from where the US-led coalition and local Syrian fighters are battling the last pocket of Islamic State (ISIS) extremists in the country. The convoy, Asharq al-Awsat reported, was to assess dire humanitarian conditions in the area due to the escalation in fighting. US-backed forces said Friday they had captured an ISIS leader in eastern Syria where the Kurdish-led fighters have been battling the extremists.

4. People from rebel-held areas in northern Syria came out onto the streets to rally against the regime, in spite of a fragile buffer zone deal and the heavy bombardment, Zaman Al Wasl reported. As with every Friday for the past 14 weeks, demonstrators held up the three-star flag of the Syrian revolution and placards recalling the first days of the Syrian revolution in 2011, saying their goal is the toppling of the Assad regime, chanting ‘‘The people want the fall of the [Assad] regime.’’ A remarkable demonstration took place in the famed village of Kafranbel, where two of its prominent activists and citizen journalists, Raed al-Fares and Hammoud Janeed, were killed by Hayyat Tahrir al-Sham militants last Friday. The group, formerly known as Jabhat al-Nusra, is the dominant force in Idleb, and has killed most of its opponents, including citizen journalists and human rights advocates.