Fighters who agreed to settlements with the regime are being told they will be sent to Idleb, despite previous reassurances that they would remain in Daraa reports Al-Modon. 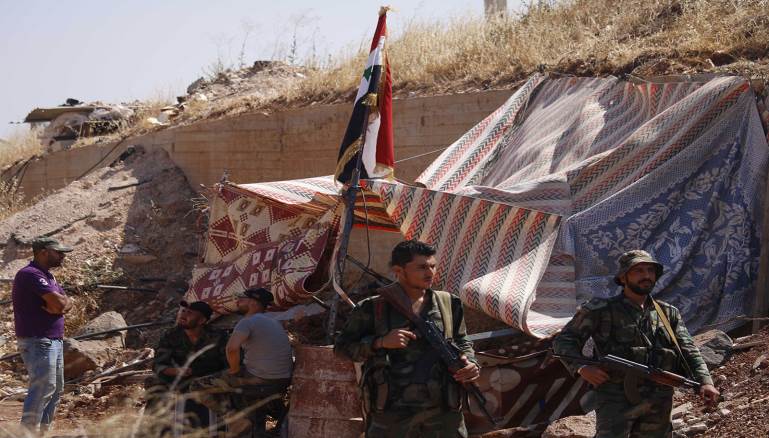 A dispute has erupted between members of the “settlement” rebel groups who joined the Fourth Division of the regime militias in Daraa province and the division’s officers, after it was decided to move more than 700 fighters to Idleb province.

The groups consist of those who accepted settlements with the regime and agreed to serve in their forces, on the condition that their service be performed in Daraa province.

The officers of the Fourth Division informed fighters and settlement group commanders in the Zeizoun base in the western Daraa countryside that hundreds of them had been selected to be moved to the frontlines in Idleb province. The decision created a state of rebellion among the fighters, who had obtained previous promises that their service would be in Daraa province and they would not have to participate in any battles outside the area.

The Fourth Division officers threatened those who rejected the transfer order with being fired from the division and the period which they had spent within the division not being counted towards their compulsory service. The rebelling fighters responded by firing into the air in the town of al-Yadouda and closing off the main road between the town and Daraa city before, a number of former commanders gave them promises that a solution for the issue would be made with the division commanders.

More than 2,000 fighters from the “settlement” groups joined the Fourth Division, most of them residents of Daraa and its western countryside, who were wanted for compulsory and reserve service.

A reserve fighter can received up to 60,000 Syrian pounds and a compulsory fighter can receive up to 40,000 pounds, as well as security and military privileges and in addition to the main promise that they would only perform their service in Daraa province, which is now being turned on its head.

Al-Modon’s sources said that the decision of the Fourth Division came as part of a series of measures taken by regime militias against members of the settlement groups in the western Daraa countryside specifically, expanding the influence of regime militias and its security branches in the area, which is included by Russian military police as a “settlement” agreement area and where the groups still have a major influence.