The recently opened office will serve the eastern areas and will provide citizens with official government documents and certificates reports SANA. 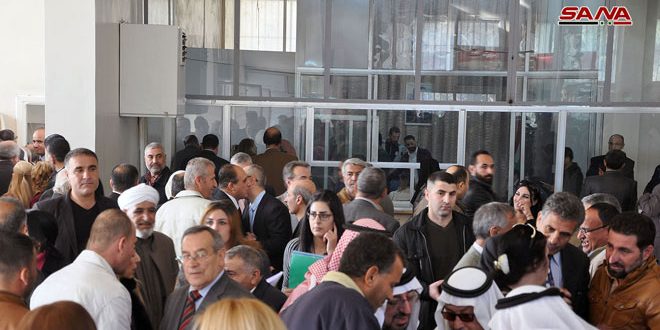 In Hassakeh governorate today, a consulate office of the Foreign Ministry was opened with the aim of providing consulate services to residents and to reduce the burden of traveling to Damascus to complete their procedures.

In a statement to SANA’s correspondent, the Director of the Consulate Office, Abdel al-Mouli al-Naqari, said that by opening the office they aim to reach every citizen in the Syrian Arab Republic and attempt to offer the best possible services, ease procedures and reduce the burden on citizens.

Al-Mouli said that the documents issued by the office would have legal and sovereign status inside and outside the Syrian Arab Republic.

For his part, the Director of the Consulate in the Eastern Areas, Raed Lahdou, told SANA’s correspondent that an office would be prepared in the Post Directorate’s headquarter in the city center and supplied with the necessities for operations, in addition to administrative and other staff being secured, who would be prepared through training courses for consulate work in the Foreign Ministry.

Among the most important services that the office will provide, according to Lahdou, would be certifying all documents granted in the country to residents of the three eastern regions (Hassakeh, Deir ez-Zor, and Raqqa) and certifying foreign documents, including, for example, educational diplomas, birth and death certificates, residency documents, and others.

Many residents expressed their relief at the opening of the office, saying that it was an improvement for the residents of the eastern areas in terms of concern for their affairs and offering services with full ease, and easing the burden of having to travel to Damascus.