Thousands of children remain in limbo, with no official documents and a diminishing chance of seeing a normal life writes Asharq al-Awsat. 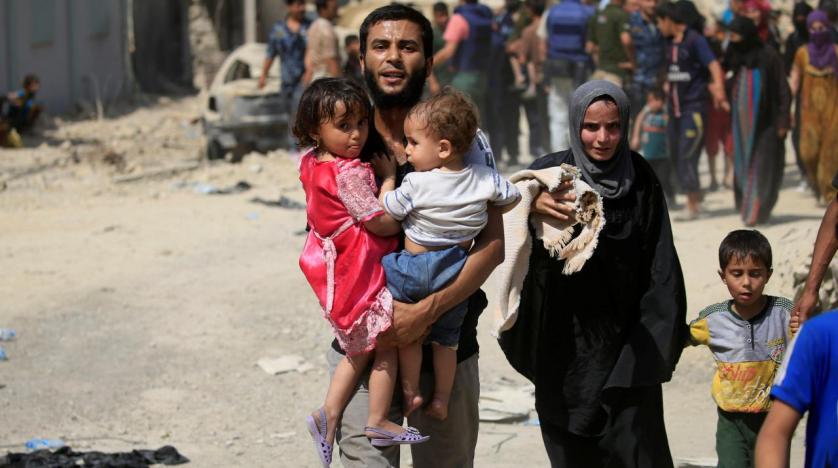 France’s announcement that it plans to repatriate 150 children of ISIS fighters represents only part of a growing humanitarian dilemma in Syria and Iraq. As of yet, the international community has not come up with a unified way to handle this issue. Fears are meanwhile, mounting over the emergence of a generation of stateless people and another generation of extremists should they remain in former ISIS strongholds.

Syrian estimates said that some 2,000 children of ISIS fighters do not have proper identification papers. Most of them live in refugee camps in Raqqa that are under the control of the Syrian Democratic Forces (SDF). Some of them do not have a father and only carry ISIS-recognized documents.

Sources from Raqqa told Asharq Al-Awsat that ISIS members used to marry Syrian women from regions under their control. Their wedding was officiated by an ISIS-approved cleric, while the real name of the husband is often omitted from the vows. The husband usually went by an alias. After the death or escape of these fighters, the children are left behind without a family name or identification card to face an unknown future with their mothers.

A similar problem is emerging in Iraq among women who were forced to marry ISIS fighters.

The source told Asharq Al-Awsat that warning signs linked to this problem first emerged in 2015. As ISIS began to lose its safe havens in Syria, fighters fled, leaving their children and wives to their fate. The children were registered at ISIS institutions under the fathers’ aliases.

Director of the Syrian Observatory for Human Rights Rami Abdulrahman underlined this problem, saying that “large numbers” of ISIS children are currently in Syria.

These figures could be as much as 2,500 children and mothers, he told Asharq Al-Awsat.

“The dangers are not just linked to them growing up as stateless, but there are concerns that they may be raised in an extremist environment because they do not have civil status and official documents,” he warned.

The Britain-based Observatory said that children born to foreign ISIS fighters in Syria live in Kurdish-controlled northern regions, regime-controlled areas or with their families in ISIS pockets in the western, southern and eastern Syrian desert.

Abdulrahman said that the majority of the ISIS wives are either Syrian or Iraqi, while the fathers are non-Syrian. The fathers often had aliases reflecting the countries they come from. The majority of Syrian ISIS fighters are known to authorities.

The dilemma facing some countries revolves around the children whose fathers are known, he stressed.

Some European countries sought to resolve this problem by suggesting that only the children be repatriated. This has led to humanitarian concerns over the mothers, who would be forced to part ways with their children.

In October, France announced that it was working on repatriating children held by Kurdish-Syrian forces. They are suspected to be the children of French extremists and their mothers will be left behind to stand trial before local authorities.

"The exception is minors, whose situation will be examined on a case-by-case basis, and there is a particular duty to safeguard the best interests of the child,” the statement added.

Their return hinges on their mother’s approval to be separated from them.

With the help of Kurdish authorities and the International Committee of the Red Cross, Paris was able to determine some of their locations in Kurdish-held northeastern Syria.

During the summer, German security officials had announced that they were prepared to repatriate over 100 infants born to Germans who had traveled to Iraq and Syria to fight for ISIS. Some 1,000 people are believed to have departed Germany to fight for the terrorist group.

Berlin said that up until November 2017, it had evidence that more than 960 Germans had left their home country for Syria and Iraq. A third of them are believed to have returned, while some 150 likely died in battles.

Back in Raqqa, children live in three refugee camps in Kurdish-held regions.

Nawaf Khalil, head of Germany-based Kurdish Center for Studies, said that Kurdish authorities provide the children with psychological support. They hail from 46 countries, while three children are orphans. This prompted the authorities to bring in three women to care for them.

Some children have been repatriated to their countries, such as Kazakhstan, Indonesia and Chechnya.