Iran is hoping to export a large quantity of Iranian goods to Syria and play a key role in the reconstruction writes SANA. 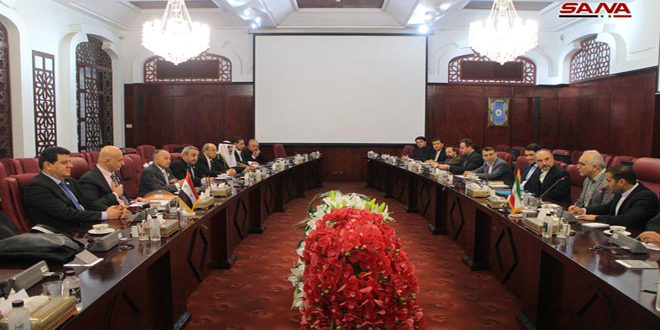 The Iranian Minister of Economic Affairs and Finance, Farhad Dejpasand, underlined the necessity of enhancing Iranian-Syrian economic relations and upgrading them to the level of the distinguished political relations.

Meeting the Syrian-Iranian Parliamentary Friendship Committee on Monday, Dejpasand said that, “deepening economic relations between the two countries entails broadening prospects of cooperation in the domain of banking relations.”

He added that exporting Iranian goods to Syria will play a key role in the reconstruction of Syria.

Regarding the joint investment in Syria, Dejpasand  said, “An agreement was signed in that domain and we should implement it.”

The Iranian Minister hoped that the agreement, which was forged during Iranian Vice President Eshaq Jahangiri’s visit to Syria, will be signed soon.

He underlined the importance of the bilateral cooperation, particularly after the unilateral coercive measures imposed on the two countries.

“We have exerted remarkable efforts to eliminate terrorism, and we can cooperate further in the reconstruction,” Dejpasand said, adding, “We are preparing all the governmental and private potentials to build solid economic relations.”

He called for the continued meetings between the two countries to be a historic model of fraternity among nations, hailing the latest victories achieved by Syria in combating terrorism.

For his part, Syria’s Ambassador in Tehran Dr. Adnan Mahmoud stressed that the unilateral economic coercive measures imposed on Syria and Iran constitute an opportunity for enhancing capabilities and economic progress.

Mahmoud noted that the Syrian Government has given priority in its work program for economic cooperation and partnership with Iran in the stage of reconstruction and all the production sectors.

Earlier that day, the Syrian-Iranian Parliamentary Friendship Committee discussed in Tehran means to activate parliamentary relations between the two countries in all domains of cooperation including the political, economic and commercial ones.