During a meeting with President Assad, Syria and Iran vowed to continue their fight, while also promising to strive for a political solution reports The Syria Times. 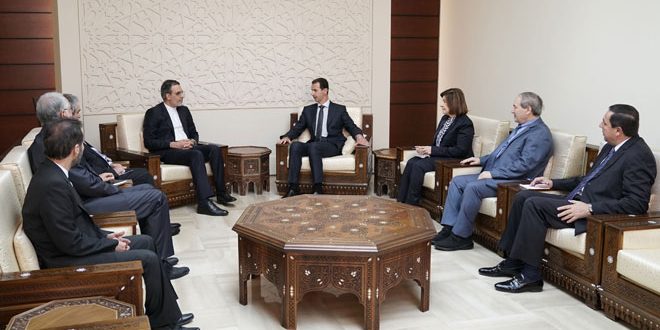 On Monday, President Bashar al-Assad and Iran's Assistant Foreign Minister for Political Affairs Hussein Jaberi Ansari discussed the latest developments in Syria and the region. Focus was put on the Syrian-Iranian relations as a key factor for stability in the region and for facing the policies of the United States and its tools that aim to disseminate chaos in the region and weaken countries that refuse to surrender to such policies

Talks also dealt with the accomplishments made in the fight against terrorism and the efforts exerted to achieve progress in the political process, particularly regarding the formation of the constitutional committee which is scheduled to discuss the current Syrian constitution.

Viewpoints were identical concerning the fact that the US administration and other countries supporting terrorism are placing obstacles that hinder a political process that could achieve through politics what they failed to achieve through years of war.

Syria and Iran stress their determination to press ahead with fighting terrorism and with pushing the political process forward  despite the American obstacles, in order to end the war in Syria and restore security and stability to all Syrian territories in a step towards attaining stability in the entire region.

Earlier in the day, Deputy Prime Minister and Minister of Foreign Affairs and Expatriates Walid al-Muallem held a meeting with Jaberi Ansari and discussed with him the strategic ties between Syria and Iran in addition to political developments in Syria and the region, particularly the contacts being made, within the framework of the Astana process, on forming the committee in charge of discussing the current Syrian constitution and the work mechanisms of this committee.