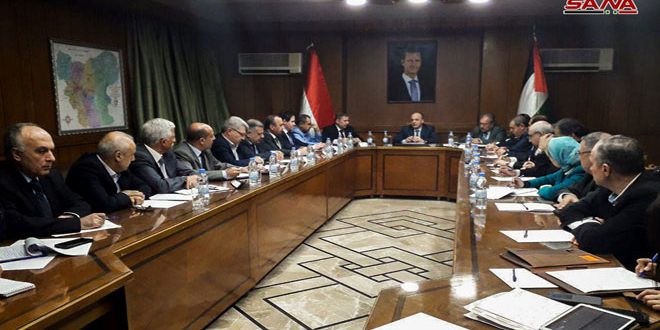 1. A United Nations aid convoy on Saturday reached a camp for the displaced on Syria's border with Jordan where tens of thousands of people are stranded in the desert amid dwindling supplies, a humanitarian organization said. Asharq al-Awsat reported that 78 trucks carrying life-saving assistance reached the Rukban camp on Saturday. The convoy was supposed to arrive last week but was delayed. UN relief trucks had planned to deliver aid to Rukban a week ago after gaining clearance from Damascus, but were delayed for logistical and security reasons, the UN said.

2. Five Russian soldiers were killed Friday in a landmine explosion in the eastern Deir-ez-Zor province, local activists told Zaman al-Wasl. The explosion that rocked a joint base for the regime army and the key ally has also left casualties from pro-regime militias, according to activist Taj al-Allow. The official number of Russians killed since the country began its military intervention in Syria in 2015 exceeds 110.

3. A tribal leader was assassinated by Daesh militant in the eastern city of Raqqa over links with Kurdish militias, local activists said Friday. According to Zaman Al Wasl, Sheikh Bashir Faisal al-Huwaidi, a leader from al-Afa’adleh tribe, was killed by a silenced pistol early morning. Daesh claimed the responsibility for Huwaidi’s death, saying the sheikh was “an apostate and one of the heads of infidelity” for his cooperation with the Kurdish Democratic Union and its allied militias. Four arrest warrants were issued for Huwaidi by the Syrian regime’s security services, according to the leaked Intelligence archives obtained by Zaman al-Wasl.

4. SANA reported that all members of the Cabinet, headed by Prime Minister Imad Khamis, arrived on Friday evening in Aleppo to inspect the state of services, economy, and development in the province, in addition to holding the weekly Cabinet session there. The state of the industrial sector and restoring Aleppo’s luster as an economic center are among the priorities of the visit, “reflecting the dedication to having Aleppo reclaim its important economic standing locally and internationally.”

5. Iraqi troops reinforced on Friday their positions along the porous frontier with Syria, fearing a spillover from clashes there between the Islamic State and US-backed forces. For weeks, according to Alaraby al-Jadeed, IS has fought back an assault by the US-backed Syrian Democratic Forces (SDF) on a key jihadist-held pocket in Syria's eastern Deir-ez-Zor province near the border with Iraq. It managed to recapture some territory from the SDF around Hajin, prompting Baghdad to dispatch reinforcements to its own border, including paramilitary units from the Hashed al-Shaabi and the army.