The Syrian Writers League has called on cultural elites to break ties with the murderous Assad regime. 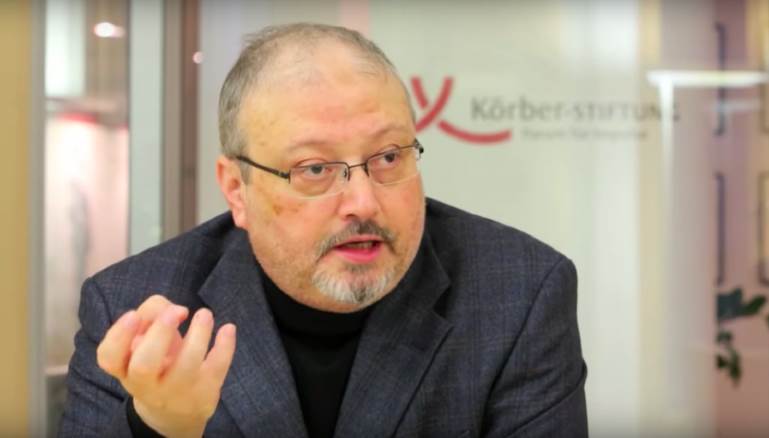 More than 50 writers and intellectuals with Arab nationalities have signed a statement that was published by the Syrian Writers League in which they condemned the assassination of the Saudi journalist and writer Jamal Khashoggi and noted a number of crimes carried out by Arab regimes, especially the Syrian regime.

The great political paradoxes caused by the assassination of the Saudi journalist Jamal Khashoggi, have brought to mind the individual and generalized political killings of Syrians by the Syrian regime over the decades. It has also reminded them that they are part of a comprehensive system of oppression administered by mutually reinforcing regimes, and that every party lays its criminal “achievements” on a foundation of the bodies of writers, journalists and politicians, and all those who dare violate the narrative and worldview of the regime.

The massacre’s doors are wide open in Syria and outside its borders.  Many people have vanished in Syrian consulates and embassies, and it’s not difficult for Syrians to remember the successful and failed assassination attempts carried out by the regime across the globe against various political figures — as it did in France, for instance, with Salah al-Bitar, one of the founders of the Syrian Baath Party; or in Germany, with Essam al-Attar, a major figure in the Muslim Brotherhood; or in Lebanon, with Mohamed Omran, a major officer in the revolutionary military council which led the coup of 1963 (a colleague of Hafez al-Assad, who was a higher rank than him) and with Salim Hatoum, who was lured from Jordan and killed in Syria, as well as the large number of Lebanese writers, journalists and politicians of various viewpoints, including Kamal Joumblatt, Rafiq al-Hariri, George Hawi, Samir Kassir, Mehdi Amel, Hussein Marwan, Salim al-Louzi, Gebran Tueni, Bashir Gemayel, Hassan Khalid, Renee Moawad, and others.

The assassination also brings to mind the Arab political figures whose killings had a tremendous impact on the conscience of Arab intellectuals and politicians, such as Farajallah al-Helou, the famous Lebanese communist leader, who was kidnapped, tortured and killed and burned with acid in the dungeons of the Syrian intelligence agencies of the “unity” state of 1959; and al-Mehdi bin Barka, the leftist Moroccan leader, who was kidnapped at the order of his country’s authorities with the help of the French security services and the Israeli Mossad in France.

Arab regimes, across their ideologies, share responsibility for the assassinations of their opponents (or even those who simply disagree with them in viewpoint), always carried out against the backdrop of slogans of unity, progress and socialism — and in the recent Saudi case, under slogans of reform and modernization. There is a dangerous link between these slogans and these limitless crimes.

These vicious crimes find writers, poets, thinkers, journalists, media figures and politicians of all shapes and sizes willing to justify them and collude without shame with the machines of kidnapping, arrest, imprisonment and torture. Thus people like us, who practice the craft of writing and literature help lubricate the hooks of the executioners and tyrants and frame them in glory and thereby increase their arrogance, violence and ferocity.

The Syrian Writers League condemns Khashoggi’s brutal assassination and demands that justice be implemented. It brings to mind the bloody, terrible history of the Syrian regime, which has preceded all its peers and lengthened the list of criminal assassinations and terrorism to establish a solid base for Arab tyrants.

The Syrian Writers League calls for justice for Khashoggi and his family and his colleagues — writers, journalists and others — who have been assassinated, and reaffirms that stopping the chain of crimes requires the cultural and literary elite to break their ties with the regime’s killing machine, and that civil governance, based on democracy and the separation of powers, and the rule of law, is the way to rid us of the political crimes which threaten us all.