Bassam Sabbagh has questioned why Israel remains outside The Treaty on the Non-Proliferation of Nuclear Weapons, stating that it poses a great risk to the region reports SANA. 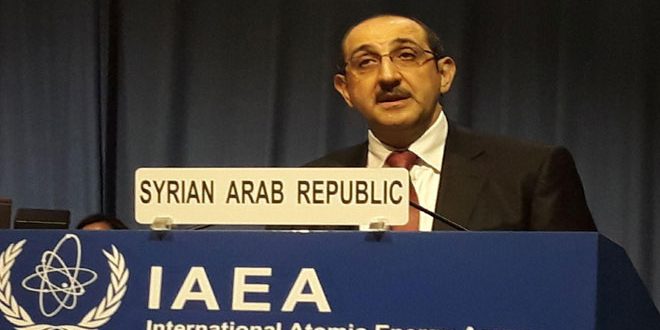 Syria’s permanent Ambassador to the UN in Vienna, Bassam Sabbagh, said that Israel remaining outside The Treaty on the Non-Proliferation of Nuclear Weapons (NPT) and The International Atomic Energy Agency (IAEA) poses a grave danger to the non-proliferation system and stirs deep concern with Middle Eastern countries.

In a statement at the 62nd conference of The International Atomic Energy Agency, Sabbagh expressed Syria’s strong condemnation of Israel’s stubbornness, which turns a blind eye to the adoption of the conference in its 53rd session titled “the Israeli nuclear capabilities” and is a clear message sent by the international community to it.

“Syria was one of the first countries which joined the NPT treaty. It was and still is committed to the noble meanings and goals of making use of nuclear energy for peaceful purposes, which this treaty represented,” Sabbagh said.

He affirmed that the Israeli confession to being responsible for the aggression in Syrian territories in 2007, after one decade of denial, makes it very necessary to move and condemn that heinous aggression and force Israel to abide by international treaties.