The meeting between the Presidents of Turkey, Russia and Iran dominated the news over the weekend 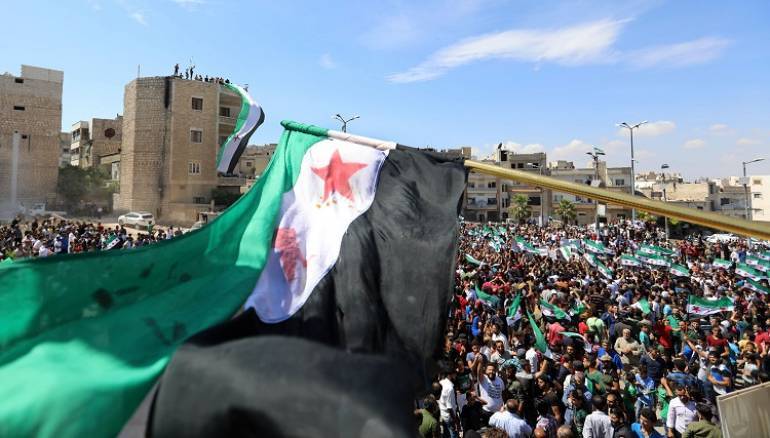 1. Thousands of Syrians came out to the streets in rebel-held areas on Friday to rally against the imminent regime offensive on the northern province. Demonstrators also denounced a summit in Tehran between the leaders of rebels’ backer Turkey and regime allies Russia and Iran to determine the province's fate. “We all came to protest to say that this people will not back down and will not return to the era of (President) Bashar al-Assad,” said Abdurazzaq Awwad, a father-of-one in Idlib city. [Anadolu News Agency]

2. Russian and Syrian regime warplanes pounded towns in opposition-held Idleb province Saturday, a day after a summit between the presidents of Turkey, Iran and Russia failed to reach an agreement on a ceasefire that would forestall a Russian-backed offensive. Witnesses and rescuers said at least a dozen air strikes hit a string of villages and towns in southern Idlib and the town of Al-Lataminah in northern Hama, where rebels are still in control. Syrian helicopters dropped so-called barrel bombs – containers filled with explosive material – on civilian homes on the outskirts of the city of Khan Sheikhoun, two residents of the area in southern Idlib said. [Zaman al-Wasl]

3. The presidents of Iran, Russia, and Turkey expressed different views over the Syrian crisis and the upcoming battle in the province of Idleb, the Syrian opposition stronghold. The Turkish President, Recep Tayyip Erdogan, called for a truce in Idleb, warning at the same time of a bloodbath in the event Syrian forces launched a military attack on it, stressing that “an attack on Idlib will lead to disaster and tragedy and massacre of humanity.” But President Putin said the Syrian government is legitimate and has the right to use all means to restore its control in Idlib. President Rouhani said that America should end its military presence in Syria, explaining that “the illegal presence of America and its interference in Syria, which led to the continued insecurity in this country, must end quickly.” [Ana Press]