At his meeting with Sergei Lavrov, Walid al-Muallem thanked Russia for their support and expressed the desire to partner with them in the reconstruction process reports SANA. 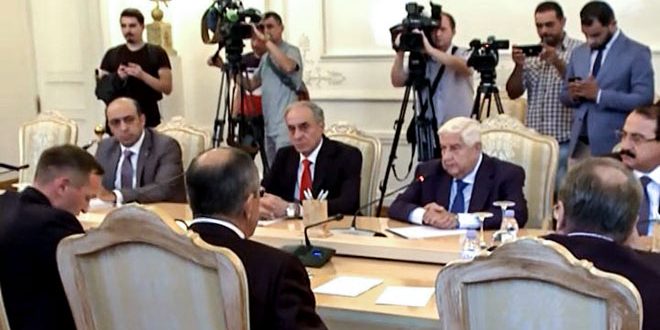 On Thursday, Deputy Prime Minister and Foreign and Expatriates Minister Walid al-Muallem said that Syria is in the last stages of resolving the crisis and liberating all its territories from terrorism and that’s why the US, Britain and France want to attack. They are aiming to obstruct the political settlement process and help Jabhat al-Nusra.

Muallem’s remarks came at the beginning of a meeting with the Russian Foreign Minister Sergei Lavrov in Moscow.

“Our people highly appreciate the work of the Russian Federation and President Vladimir Putin in combating terrorism in Syria,” he said.

The Minister went on to praise the role that Russia played at both the Astana and Sochi meetings and that Syria is committed to the political process, especially in view of the field situation in Syria.

“We have just one more step to take to end the crisis in our country and liberate our entire territory from terrorism,” he noted.

“The US, UK and France are not happy with the failure of their plot in Syria, so they want to by-pass the UN Security Council and attack in order to foil the political process, offer assistance to Jabhat al-Nusra and prolong the crisis. Therefore, we have the legitimate right to defend ourselves and the aggressor States will bear the disastrous consequences,” said Muallem.

“I can confirm that we do not have chemical weapons. It is not possible for us to use them because we are victorious in the battles against terrorism and there is no need to use them. Therefore, all the pretexts of the aggressors are exposed,” Muallem said.

For his part, Lavrov said that the tasks related to eradicating terrorism from the Syrian territory are coming to an end and it’s time to rebuild the Syrian economy and restore stability to all areas. He pointed out that the projects discussed in the framework of the Syrian-Russian Joint Governmental Committee for Economic, Commercial, Scientific and Technical Cooperation will undoubtedly help to achieve this goal.

He added that the two sides will also discuss the external aspects of the situation in Syria with an emphasis on the need to attract international assistance.

Lavrov said that it is necessary to implement the outcomes of the Syrian National Dialogue Congress in Sochi in order to resolve the crisis in Syria.

Lavrov asserted that the Russian and Syrian positions are clear and based on international resolutions, especially the Security Council resolution no. 2254, which states that the Syrians decide their own future.

In a joint press conference, Muallem said that the US, France and UK want to carry out a triple aggression on Syria in order to shore up the terrorists of Jabhat al-Nusra.

He added that the US presence in Syria is aggressive and illegal and has not been requested by the Syrian government.

Lavrov, in turn, noted that the US side is trying to prevent the international community from assisting Syria in the process of building its economy and the reconstruction

Earlier, Muallem, who chairs the Syrian side of the Syrian-Russian Joint Governmental Committee for Economic, Commercial, Scientific and Technical Cooperation, arrived on an official visit to Moscow following an invitation by Lavrov.