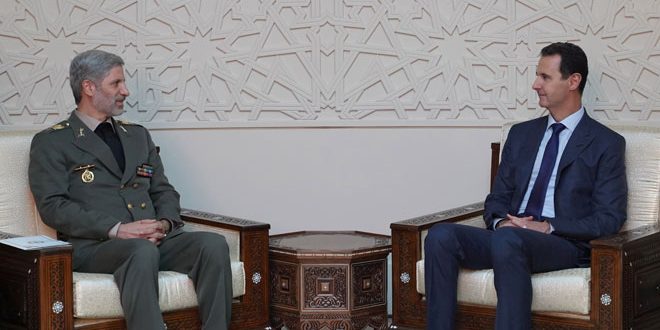 The meeting tackled the victories being achieved by the Syrian Arab Army in the war on terrorism.

Minister Hatemi stressed that the steadfastness of the Syrian people, its leadership and their victory over terrorism will go down in the history of Syria and the region as an example to follow, not only for the people of the region but for the entire world.

He expressed confidence in Syria’s ability to continue along this path until it has completed its victory against terrorism.

The minister reiterated his country’s support of Syria’s unity and independence, pointing out that Tehran will continue to act on these principles, regardless of the threats and pressures exerted by other countries that support terrorism.

For his part, President al-Assad affirmed the importance of this visit and the depth of Syrian-Iranian relations, stressing the importance of developing the process of joint coordination and outlining long-term cooperation plans that enhance the steadfastness of the people of Iran and Syria in the face of everything they are subjected to.

The President noted that the US approach and tools in the region, especially with regard to approaching the Iranian nuclear file, imposing sanctions on Russia, and attempts to prolong the war in Syria by supporting terrorist organizations and making threats towards the Syrian Arab Army affirms the correctness of the policies pursued by the anti-terrorism axis and the importance of enhancing its strengths in the face of the subversive and destabilizing American approach.