Ahmadinejad meets Syrian Prime Minister Wael al-Halqi in Tehran and says the Syrian people will overcome the difficult conditions adding "Syria will cross the crisis it encounters into the land of safety." 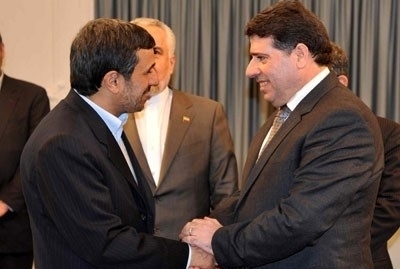 President Mahmoud Ahmadinejad of Iran affirmed his confidence that the Syrian people will overcome the difficult conditions adding "Syria will cross the crisis it encounters into the land of safety."

"No solution to the crisis except by the halt of violence through dialogue, national understanding, democracy and elections," President Ahmadinejad said during a meeting with Syrian Prime Minister Wael al-Halqi on Tuesday.

He expressed support to Syria, as government and people, to restore stability and face different challenges as well as backing efforts of reform and the peaceful solution to the crisis in Syria.

He called on the governments of Syria and Iran to boost bilateral cooperation and to take all necessary measures to develop it in the interests and aspirations of the two peoples.

Al-Halqi, for his part, briefed the Iranian President on what Syria is encountering of terrorism, backed by international powers, affirming the Syrian people's capability to face these challenges and overcome them.

He pointed out to the difficulties which face the national economy and the losses in the sectors of oil, gas and electricity due to the acts of the armed terrorist groups.

The Iranian President called for taking all means to provide the basic needs for the Syrian people.

Iran said the peace plan put forward last week by Syrian President Bashar al-Assad was a step toward the establishment of stability in Syria.