Syria and Iran agree on $1 billion credit facility focusing on energy and electricity. 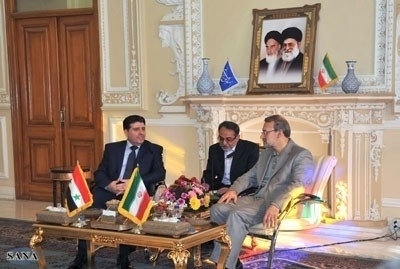 Syria and Iran have agreed a $1 billion credit facility between the Commercial Bank of Syria and the Export Development Bank of Iran, Syrian state television reported on Wednesday. It also said the two countries had reached agreements on energy transmission and electricity equipment.

Seven other contracts on energy transmission and electric equipment were also signed during the bilateral talks between the Syrian and Iranian sides in Tehran.

Heading the Syrian delegation, Prime Minister Dr. Wael al-Halqi stressed that Syria is facing a global war to divert it from its national stances and undermine the axis of resistance in the region.

He noted that the powers hostile to Syria have failed to achieve their goals and Syria is going ahead to achieve security and stability, launch dialogue and national reconciliation and build Syria depending on its capacities and the support of its friends.

The Premier hailed the importance of the outcomes of this visit in enhancing cooperation between the two countries, expressing gratitude to Iran for its efforts to support the Syrian people in their development process and against terrorism.

For his part, Iran's First Vice President Mohammad Reza Rahimi, who headed the Iranian side to the meeting, condemned the terrorist attacks against the innocents in Syria which were carried out by armed terrorist groups backed by regional and international countries.

He denounced the terrorist bombing in Aleppo University on Tuesday and offered condolences to the martyrs' families.

Iran's First Vice President stressed that Iran will always support Syria and the steadfastness of the Syrian people on all levels and under all circumstances.

Rahimi reiterated his country's support to the political program to solve the crisis in Syria as it constitutes the objective and direct basis to get out of the crisis through national dialogue and political means.

He expressed confidence in the ability of the Syrian people to achieve victory, overcome the current circumstances and restore security and stability.

In a statement to SANA correspondent, the Minister of Electricity, Imad Khamis, said that the contracts included 50 million euros to establish a power generation plant in the Syrian Coastal region with a total capacity of 650 megawatts.

He added that the plant will depend on fuel and gas for operation and the Iranian side will fund its establishment.

Minister Khamis said that around USD 500 million of the Iranian loan were allocated for the electricity sector, indicating that Syria agreed with Iranian Mapna Engineering and Construction Company on several investment projects, including investment in wind power.

On buying electricity from Iran, he said that the Iranian side will coordinate with Iraq to carry out the project of transmitting electricity to Syria and overcome obstacles hindering it.

In a relevant context, Premier al-Halqi and Ali Saeedlou, Deputy President of the Islamic Republic of Iran, reviewed the outcome of talks held between the two countries with the aim of enhancing bilateral relations in a way that serves the aspirations of their peoples.

Saeedlou stressed his country's commitment to continue its support to the Syrian people, calling for speeding up procedures to deliver the aid, particularly in the financial, economic, energy and oil derivatives sectors.