Moaz al-Khatib, the head of the Syrian National Coalition, told NOW on Thursday that “the situation [in Syria] is stalling and I want to avoid bloodshed.” 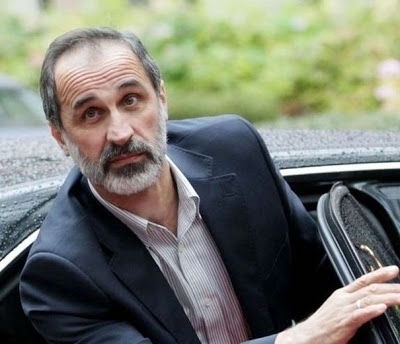 Moaz al-Khatib, the head of the Syrian National Coalition, told NOW on Thursday that “the situation [in Syria] is stalling and I want to avoid bloodshed.”

“Every discussion that alleviates people’s suffering can be discussed, but the regime has transgressed all limits. If there is anyone who is not involved in the bloodshed and wants to find a political solution, [we] would not mind that.”

Khatib had linked his initiative for holding negotiations with the Syrian regime to two main conditions, namely releasing 160,000 prisoners and instructing Syrian embassies worldwide to grant Syrians – whose passports have expired – new passports or extend the validity of current ones for two years at least.

However, Syrian opposition circles disapproved of Khatib’s statements. The Syrian National Council thus rejected them in a statement of its own issued yesterday as “[these statements] contravene the coalition’s statute and its founding Doha Document, both of which are categorically opposed to holding negotiations with the regime.”

Syrian National Coalition member Kamal al-Labouani even called on “Moaz al-Khatib to back down or resign from his position as chairman and become an ordinary member who would [then] be free to express his opinion as he best deems fit.”

Khatib responded to those calling on him to resign, telling NOW in an exclusive interview: “I do not mind quitting any position when its disadvantages outnumber its benefits.”

Syrian Human Rights Observatory Director Rami Abdel Rahman commented on the matter, saying: “Whether the initiative stems from individual or collective origins, we ask those who are opposing Khatib’s initiative what other ways are available to end the killings in Syria and what solutions they have proposed to assist the Syrian people.”

Abdel Rahman argued that “a leader has to look for solutions that help the people, and the step undertaken by Khatib is by no means a concession or selling of [the Syrian people’s] blood.”

“All we care about is to end the ongoing bloodshed and destruction in the country and transition towards a democratic state. We will never stop going after the assassins of the Syrian people from the president down to the most insignificant of elements even in the event of an international settlement.”

The Free Syrian Army (FSA) joined the National Council in voicing a harsh rejection of negotiations.

Captain Alaa al-Basha, an FSA staff member on the so-called Southern Front, said: “We in the Free Syrian Army emphasize our wish to act hand in hand with our honorable political brothers. Speaking from the battleground, we tell the regime and its cronies and even opposition politicians in Syria and abroad that we will have no negotiations or talks until the assassins are held accountable, starting with [Syrian President] Bashar al-Assad. The most modern of politicians may accept to hold negotiations but he would not be one of ours nor would he be representing us in any way. Rather, those who represent us are the rebel heroes who sacrifice their lives, not those who sit on chairs surrounded by cameras and lights that reflect on their colored clothing.”

Abu Firas, a spokesperson for the Unification Brigade in Aleppo, said: “We are surprised by such statements before Assad’s killing machine is brought to a halt. One cannot negotiate with the regime before the killings stop. There is a major problem with the decisions made within the Coalition right now as was the case with the National Council before it due to the gap between the rebels on the inside and the politicians abroad.”

Abu Firas went on saying: “I trust the rebels on the field, as they have proven that they are capable of destroying in great part the might of Assad’s army. Desertions among the army’s ranks have destroyed 70 percent of its power and a large section of the Syrian territory has been liberated. In Aleppo for instance, the rebels have managed to liberate 65 percent of the province.”

Yamaz Said, a spokesperson for the Kurdish Youth Movement, told NOW: “We will never trust this regime because it makes no difference between people and stones, and one cannot negotiate with it based on the two conditions set by Khatib. Truce without an international intervention force is impossible. Khatib’s statements allude that the international community has turned its back on the Syrian people and turned a blind eye to the crimes of the Assad regime, which amount to crimes against humanity.”

Abdallah al-Shami, the media spokesperson for the Al-Farouq Brigade in Damascus and the Damascus Province, said: “the National Council, the [Syrian National] Coalition and other formations abroad may be subjected to political calculations and are unfounded domestically, as they were originally formed due to the intervention of regional and international players.”

“The [Syrian National] Coalition is a foreign body with no links on the inside … We neither reject it nor accept it … The current stage is that of liberating the land and the most important thing is to unify all efforts in order to liberate the land from these criminal gangs.”

The Syrian Revolution Coordinators’ Union issued a statement, saying: “The only negotiation [would be] to hand over power and take the country towards a democratic rule. If this is attainable through non-military means, we support such negotiations based on the constant principles of the revolution, which cannot be the object of any concessions. We hereby support Mr. Moaz al-Khatib, who heads the National Coalition for Syrian Revolutionary and Opposition Forces, and every action he might undertake in conformity with this vision and these constant principles.”

Meanwhile, several revolution coordinators, such as in Baba Amro, had voiced on Facebook their support for Moaz al-Khatib, as was the case with Khaled Abu Salah, a media activist in Homs.