Ala Jaleema leans against the wall, clutching her daughter in front of her. For the second time in six months she and her seven children are homeless: first the Syrian regime flattened their home with mortar shells, and then soldiers from the Free Syrian Army (FSA) evicted them from the scrap metal warehouse they’d been sheltering in. 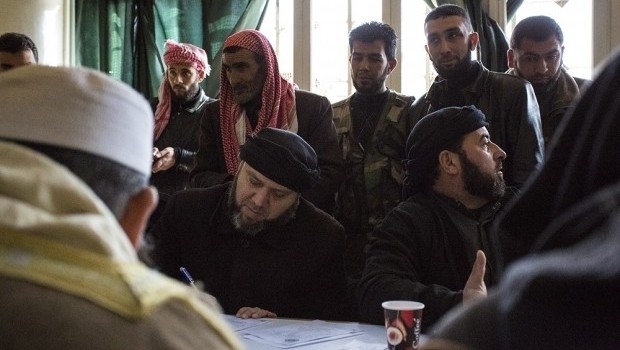 Ala Jaleema leans against the wall, clutching her daughter in front of her. For the second time in six months she and her seven children are homeless: first the Syrian regime flattened their home with mortar shells, and then soldiers from the Free Syrian Army (FSA) evicted them from the scrap metal warehouse they’d been sheltering in.
“They said that the man who owned the warehouse was Shabiha,” she says. “So they threw us out and took our mattresses and blankets. They’re supposed to protect us, not steal from us.”
Ala Jaleema is just one of dozens who have come to an old school building in the Al Haya district of Aleppo on a sunny Monday morning to ask for justice. This building is now the headquarters of Jabhat Tahrir Syria Islamia (Freedom for Islamic Syria), and the man in charge is Haji Tel Rafat. He rushes from room to room, presiding over marriages, divorces, legal disputes, and criminal cases. Ala Jaleema catches him as he passes her in the corridor, and explains what has happened to her. “We will punish the people who did this,” he promises her. “They will be put on trial, and we will provide you with new blankets.”
Before the revolution Haji Tel Rafat, a high-ranking Sheikh, was considered a criminal: he was arrested and imprisoned three times for speaking out against the Assad regime. But now he and his men have filled the void in law and order that Assad’s security forces left as they retreated from this suburb of Aleppo. He set up Jabhat Tahrir Syria Islamia three months ago as a place where the people of FSA-controlled Aleppo can come to settle their grievances according to the principles of Sharia law. He has also established the Islamic Civilian Police Force, with a rapid response unit ready to deal with any criminal incidents in this part of the city.
The Jabhat Tahrir covers marriages, divorces, legal disputes, and criminal cases. (AAA photo)
All parts of Aleppo society are represented here: young couples wanting to get married queue beside older couples seeking a divorce. Scores of lone women with young children wait patiently as the men file to the prayer room at the muezzin’s call.
In a room set aside for police questioning, Ahmad—formerly a member of Assad’s security forces—is interrogating a man who is accused of stealing money from a neighbor. Ahmad crossed over to the opposition a year ago, but he has not forgotten the skills he learned while he worked for the regime. The accused man insists he was innocent, but Ahmad is not convinced. As the conversation clocks over his voice grows louder, until eventually the man is taken to a makeshift prison cell in the basement of the building. There, his interrogation continues.
But Haji Tel Rafat is anxious to explain that his jurisdiction is different to that of Assad’s security forces. “While the regime was in charge the people who worked for the security services never left their office, or made an effort to go out and speak to the people. But now we see dozens of people every day. Sometimes one hundred, sometimes five hundred.”
In the past month various factions of the FSA have formally pledged their support and manpower to Haji Tel Rafat’s project. The building’s entrance is guarded by Kalashnikov-toting FSA fighters, while others patrol the corridors inside. It appears that out of the chaos of the last few months, a new system of governance is forming.
There are worries that the growing presence in Aleppo of more extreme groups such as the Salafi Jabhat Al-Nusra may prove to be a challenge to this new legal system, as well as to the stability of Syria and the wider region in the years to come. But for now, Haji Tel Rafat is confident. “There is no connection between us,” he says. “Jabhat Al-Nusra are not part of this project, and we are not like the more fundamentalist Sharia legal systems. We don’t punish people who don’t pray, we just try to educate them in the ways of Islam.”
As he turns again to speak to the next person in the queue, he sums up his vision for his project. “We are operating a Sharia system, but we are moderate. This is a place that exists to serve everyone.”