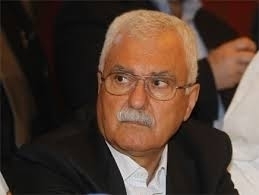 President of Syrian National Coalition George Sabra announced Thursday that the Coalition will not participate in a proposed Geneva 2 conference, based on a U.S.-Russian agreement to find a peaceful political solution for Syrian crisis.

Speaking at the conclusion of a meeting of the Coalition in Istanbul, Sabra said the Coalition will not participate in any conference as long as an "invasion" by Iran and Hezbollah in Syria continues. He said discussions of such conferences and meetings are "nonsense" in such a context of such "cruelty against the Syrian people.”

General Coordinator of the National Coordination Committee for Democratic Change Forces in Syria (NCC), Hassan Abdul Azim, meanwhile said that his group would participate and that its delegation to Geneva 2 has been finalized. He said the NCC will soon release a memorandum containing its vision of the mechanisms required for a political solution in Syria.

In an interview with al-Rai newspaper, Abdul Azim said it was the NCC's wish that the opposition, either inside Syria or abroad, and including the Kurds, all participate in Geneva 2 under one delegation – or at least with a unified political vision and view, and with skilled negotiators.

Abdul Azim summarized the NCC's demands at Geneva 2, saying: "We want to stop all forms of violence, to stop providing both parties with weapons, to negotiate to form a transitional government with full authority to put in place constitutional principles that lead to parliamentary and presidential elections according to the resolutions of Geneva 1".

"We have a declared vision of the political solution and we have delivered this to the Russian and Chinese embassies, and to the Arab League and the United Nations. Now we have a more comprehensive memorandum that has new ideas and new mechanisms to make Geneva 2 successful; to remove all obstacles from its path, leading to an end to the destruction, the humanitarian violations and the release of all detainees and political prisoners, to move to a democratic and pluralistic system and to save Syria from destruction," he said.

President of the NCC abroad, Haytham Manna said the opposition's inability to form a unified delegation constituted a two-point loss against the Syrian regime ahead of Geneva 2, even more than the losses already felt in Qusayr.