The PYD, accused of working with the Syrian regime, has arrested many Kurdish revolutionaries 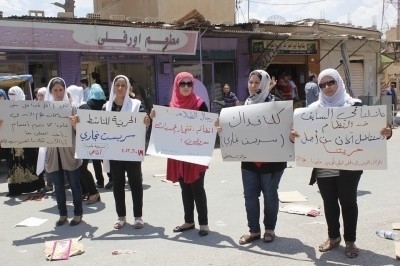 In a remarkable move, Kurdish women of from Amouda city, in north-east Syria have staged a protest in solidarity with detainees in Kurdish Democratic Union Party (PYD) prisons.

The PYD, well-known for its support to Assad's regime has been accused of arresting many Kurdish activists who have sided with the Syrian revolution.

The Kurdish party is a member of the internal Syrian opposition front, the National Coordination Committee for Democratic Change (NCC) in Syria. While it is critical of the Assad government, the PYD has been accused by other Syrian opposition groups of collaborating with the Baathist regime, serving to enforce Syrian president Bashar Assad's policies in Kurdish regions and silencing Kurdish critics, such as Mashaal Tammo.

The PYD in turn has accused the SNC as acting as Turkey's henchmen, and, due to a long-running dispute between the PKK and the Kurdish Democratic Party (KDP). It is also at odds with the KDP-supported Kurdish National Council.

The PYD is a Syrian Kurdish political party established in 2003 by Kurdish nationalists in northern Syria. The party is affiliated with the Kurdistan Workers' Party (PKK), which is considered a terrorist organization by Turkey, the United States, the European Union and NATO.