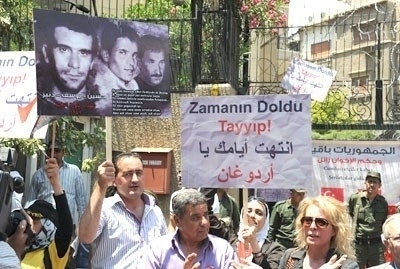 Syrian and Turkish citizens on Tuesday staged a sit-in outside the Turkish Embassy in Damascus to express solidarity with the Turkish demonstrators facing repression under Turkish Prime Minister Recep Tayyip Erdogan and his government.

Those gathered denounced the policies of Erdogan, the leader of the Justice and Development Party (AKP in Turkish).

They condemned the repression of Turkish protestors by Erdogan's forces, his government's support for terrorists shedding Syrian blood and the theft of industrial facilities in Aleppo.

One of the Turkish participants said they are calling on Erdogan to step down because of his complicity in the killing of Syrian, Libyan and Iraqi people and his continued crimes against the Turkish people.