Participants demanded the closure of the Israeli embassy in Cairo 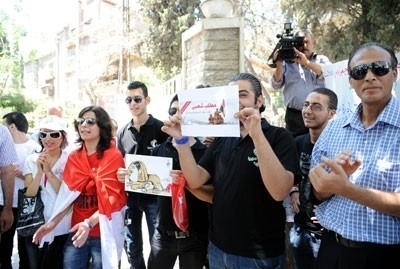 Dozens of Syrians took part in a sit-in outside the Egyptian embassy in Damascus on Sunday in solidarity with Egyptians demanding the removal of  President Mohammad Mursi and his Muslim Brotherhood party.

Participants chanted slogans of solidarity with the Egyptian people, condemning the Muslim Brotherhood and rejecting Mursi's attempts to sever the bonds between Egypt and Syria.

They raised signs demanding the closure of the Israeli embassy in Cairo, emphasizing the bond between the Syrian and Egyptian people against Zionism in the region.

Those taking part expressed full support to the Egyptian people in ejecting the Muslim Brotherhood's rule.