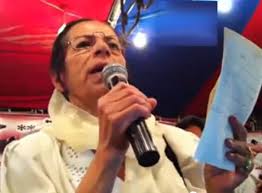 Syrian Druze icon and the daughter of the renowned late nationalist leader Sultan Pasha al-Atrash, Muntaha al-Atrash, is to be charged with offenses relating to “supporting terrorism and agitation.”

The charges will be heard by the extraordinary Counter Terrorism Court.

All4Syria has learned from sources within the Ministry of Justice that top security official Ali Mamlouk asked the ministry directly to charge the highly respected Syrian figure.

The sources said that Lebanese Druze politician Wiam Wahhab is also involved in encouraging Mamlouk to carry out the charges.

Atrash has played a vital role in the Syrian revolution since its inception. She is well known for her history of opposition to the Assad family and her activities defending human rights.