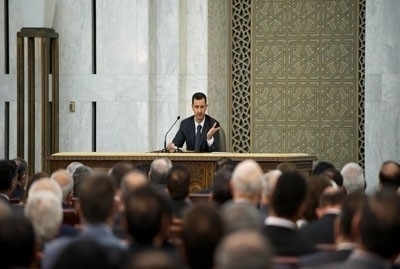 A new regional leadership of al-Baath Arab Socialist Party was selected on Monday during a plenary meeting of the Party's central committee,  the Syrian state news agency SANA reported.

President Assad chaired the plenary meeting of the Central Committee of the Baath Party on, the agency reported.

Assad stressed the importance of deepening interaction with citizens to overcome the negative effects of the crisis, the agency said.

A Syrian writer and journalist described the new step as “changing hats.”

“Assad changed names but did not change the role of the Baath command as a mere loyal supporter to Bashar Assad,” Adnan Abdul Razak told The Syrian Observer.

All the members of the old Regional Command have been replaced with new members, except for Assad himself.

A Syrian analyst noted that the biggest names that have been replaced are vice-president Farouk al-Sharaa and top security leader Saeid Bkheitan, as well as former Minister of Finance Mohammad Hussein.

The ousting of Sharaa effectively means that Assad has got rid of all his father’s regime figures, journalist Johnny Abo noted, speaking to The Syrian Observer.

“The regime wants to say that dialogue is not an option if the opposition wants to speak to people who have not participated in the direct violence against the people, such as Shaara,” Abo said.

Sharaa’s name was touted as a possible leader for an interim period.

Among the new members of the party leadership are Prime Minister Wael al-Halqi, Speaker Ghassan Laham, and the head of the Students Union Ammar Saati.

All the new members are known for their absolute loyalty to the Assad family.

The Baath Party in Syria is theoretically a branch of the pan-Arab Baath Party, which has not had a leader since the late President Hafez Assad died in 2000.