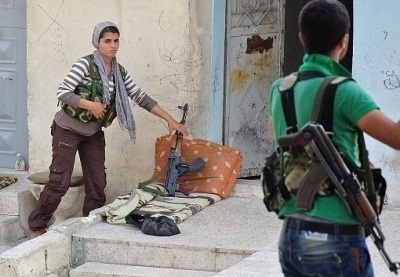 “A three-man delegation from the Syrian regime, led by Muhammad Khair Osi, a Kurd with close ties to President Bashar al-Assad, met with the Kurdish parties in Qamishli last month,” the source, a Syrian Kurdish politician, told Rudaw on condition of anonymity.

“The delegation delivered a message from President Assad to the Kurdish officials regarding his desire to start negotiation and resolve the Kurdish issue,” he added.

According to him, all Kurdish parties but one have welcomed the Syrian initiative. He did not name the opposing party, but said that it wants a consensus among Kurdish leaders before talking to Damascus.

But Abdulsalam Ahmad, co-chair of the Kurdish National Council (KNC) — an umbrella group of more than 10 Kurdish parties — denied any talks having taken place with the Syrian regime.

“We didn’t meet with the regime nor did the other Kurdish political parties meet as far as I know,” Ahmad said.

He added that leaders of the Democratic Union Party (PYD) – which is affiliated with the Kurdistan Workers Party (PKK) and has been accused by critics of maintaining secret links with Damascus — had rejected the negotiation offer by the regime.

According to Ahmad, the Syrian delegation’s main condition was that Kurdish groups should declare openly their talks with the Assad regime.

It is believed that the Syrian regime hopes to use peace talks with the Kurds and its limited military success against the Arab rebels as a trump card in the proposed Geneva Conference.

There has been no clarity over whether that conference, to end more than two years of civil war that has killed an estimated 100,000 people, will go ahead.

Ahmad said that as the second-largest population in Syria, the Kurds have every right to look out for their best interests.

“We have no problem holding talks with the regime whenever the Kurdish movement decides such a step is in the best interest of the Syrian Kurds,” he said.

Ahmad says that the Kurds stand neutral in the war between Damascus and the Syrian rebels.

“It makes no difference for the Kurds whether they negotiate with the opposition or with the regime,” he said. “The regime has not yet lost legitimacy in the international community and it still controls most of Syria. It has embassies in dozens of countries and is still a member of the UN.”

While denying that the KNC had approached the regime with a negotiation proposal first, Faisal Yousif, a KNC member, said negotiating with the Assad regime alone might not solve the Kurdish issue.

“According to the KNC protocols, we are part of the revolution,” he said. “We support peaceful solutions for the current crisis, but the Kurdish issue cannot be resolved by holding negotiations with the regime alone.”