The shrine comprises the corpse of the widely respected Islamic military commander Khaled Ibn al-Walid, who died in Homs in the 7th Century 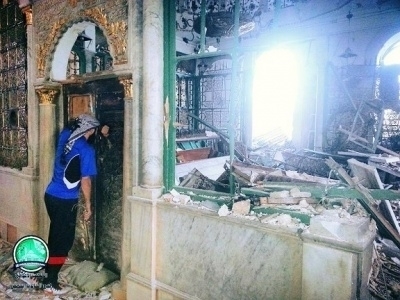 Heavy artillery shelling in the city of Homs in Syria caused the complete destruction of the Khalid Ibn Al- Walid shrine, the London-based Syrian Observatory for Human Rights told AFP.

The Khalid Ibn Al- Walid Mosque, which holds the shrine, is located in an area controlled by the armed opposition and FSA, and it has suffered huge amounts of damage as well as being partly burned.

Al- Khalidiya area, where the mosque is situated, is part of old Homs and it has been under siege for more than a year, with almost daily bombarding.

Activists reported that the shelling has been intensified recently in the area in an attempt by the regime forces to control it before the middle of Ramadan, according to the plan.

The shrine of Khalid Ibn Walid was one of the most important religious sites for Muslims, and the mosque is famous for its two high minarets and beautiful domes.

The shrine comprises the corpse of the widely respected Islamic military commander Khaled Ibn al-Walid, who died in Homs in the 7th Century.