Residents have their food confiscated at checkpoints 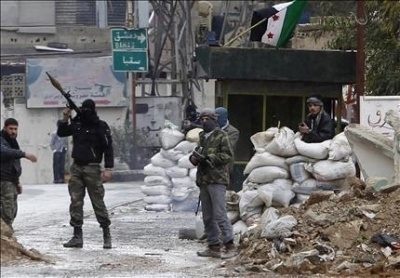 Suffering under a severe siege by government forces for over two months, neighborhoods in the Damascus Countryside have are now facing difficulties getting even basic food items.

The siege has now reached a point where getting bread into the areas is considered a crime on par with the smuggling of weapons and arms. Medicines are also in short supply.

Anecdotal evidence points to the difficulties of obtaining food.

Abu Ayman, a taxi driver, took a gamble in leaving the neighborhoods to try to get bread to his children, until checkpoints erected by Popular Committees deprived him of the chance.

Strict inspections do not exempt anyone, even women, as reported by Umm Mohammad, who, at a checkpoint, admitted hiding three bags of bread under her coat as she was afraid of detention.

Walid, from Douma,15 kilometers east of Damascus, told of how he wanted to bring his daughter sweets after she had asked him to bring her some for months. As usual, however, the sweets were taken away at a checkpoint.

Luckily, there is still some agricultural and livestock production to cover some of the people’s basic needs and alleviate the suffering.

"It is clear that there is a general regime policy to starve people in besieged areas. People depend mostly on humanitarian charities and the local coordination council,” said Abu Abdo, an activist from Eastern Ghouta.

He said civilians are suffering more than the military groups from hunger, because they have their own access to food.

"But civilians are not allowed to bring any kind of food inside, not even a piece of bread," he said.

Regarding Breakfast (Iftar) during Ramadan, Abu Abdo said that there are several projects trying to help provide food for those fasting, distributing Ramadan meals through common relief offices and the charities affiliated with the local council.

But he said, an important and overlooked issue was the fact that "there is discrimination when it comes to distributing aid."

"Sometimes it happens by mistake, with people’s needs being wrongly evaluated as a result of untrained staff. Other times it is intentional and there are opportunists who are working for their own personal advantage," he said.