Government and opposition exchange blame for the deadly blast 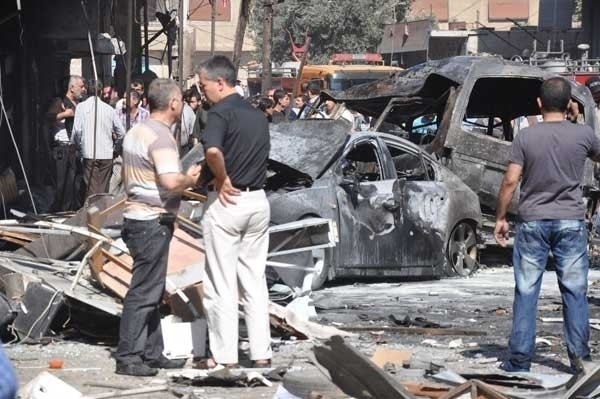 A car bomb exploded in the Syrian neighborhood of Jaramana, outside the capital Damascus, killing 10 people and wounding 62, the Syrian state news agency SANA reported.

The government blamed “terrorist groups” for the attack, but Syrian activists believe it was a plot by regime security forces.

The Syrian Foreign Ministry urged the U.N. Security Council to condemn the blast.

"Terrorists of the Islamic State of Iraq and Sham, affiliated with Al-Qaeda, perpetrated a new terrorist crime in a residential neighborhood which was crowded with people," the Ministry said in a letter to the UN Secretary General and the Security Council, hours after the blast took place.

"A big explosion using a booby-trapped car at al-Siyouf Square in Jaramana claimed the lives of 10 civilians and injured 66 others, among them children, also causing massive damage to surrounding shops, houses and cars."

“The Islamic State of Iraq and Sham has claimed responsibility for the crime, which adds to a series of terrorist attacks perpetrated by Al-Qaeda-linked terrorist organizations during recent months in Syria,  claiming the lives of dozens  of Syrian civilians,” the letter continued.

Jaramana, which lies about 5 kilometers southeast of the Syrian capital, has a mostly Christian and Druze population, known for backing the regime of President Bashar Assad.

The opposition Syrian Observatory for Human Rights said the blast killed seven and wounded more than 30. It said the blast caused heavy material damage and started a fire.

No group immediately claimed responsibility for the attack.

A source at the Damascus Countryside Police Command blamed the explosion on “terrorists” who blew up a car rigged with a large amount of explosives in the densely-populated area.

All the injured were admitted to Jaramana, al-Muassah and Damascus hospitals for treatment.

The car was parked in the square near the entrance to the Janayen neighborhood of Jaramana, SANA reported, pointing out that the explosion set off fire in a nearby building before firefighters rushed to the area and extinguished the flames.

Syrian rebels and opposition groups usually blame such incidents on the government.

“Syrians wouldn’t do such a terrible thing.”