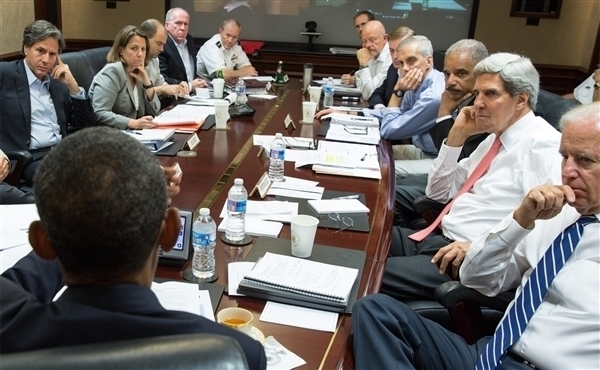 A stroll around the White House grounds with his top adviser on Friday evening changed President Barack Obama’s mind about getting Congress to sign off on a military strike in Syria, senior White House officials told NBC News.

Obama had been leaning toward attacking Syria without a congressional vote for the past week, the officials said. Obama was convinced he had the evidence to back up a strike and as a result dispatched Secretary of State John Kerry to make a passionate case for U.S. action. But only hours after Kerry called Syrian President Bashar al-Assad "a thug and a murderer" and accused his regime of using chemical weapons to kill 1,429 people, Obama changed his mind as he walked across the South Lawn with Chief of Staff Denis McDonough, the officials said.

NBC's Chuck Todd describes the political process for seeking congressional authorization for a strike on Syria, and says that the president's decision to wait on Congress is a departure from 30 years of strengthening executive branch power.

Returning from that walk, the president called his advisers in the early evening to inform them of his new decision.

The plan was immediately met with robust resistance from a whiplashed Obama team who had listened to Kerry lay out the administration's strongest case yet for action against Assad. "My friends, it matters here if nothing is done," Kerry had argued. "It matters if the world speaks out in condemnation and then nothing happens."

Obama's National Security Council had believed since last weekend that requiring a vote was not even on the table and that “consultation” in the form of congressional briefings and behind-the-scenes conversation was all that would be needed before a strike. One senior official noted that no key leaders in Congress had specifically requested a vote on military intervention.

Officials said that after the president met with national security advisers on Aug. 24, they determined the evidence showed Syria’s Assad regime had used chemical weapons in an attack earlier this month. At that time, the president indicated he was leaning toward a strike.

But a growing number of Congressional members were beginning to question the administration’s strategy by the end of the week.  And an NBC News poll released Friday morning showed that nearly 80 percent of Americans agreed that the president should seek approval in advance of taking military action.

Officials said Obama also was influenced by Thursday’s lively debate in the House of Commons, where Prime Minister David Cameron lost a vote in Parliament to authorize participation in an allied strike against Syria. Cameron had been a staunch advocate of military action but was chastened in the wake of the vote.  “It is clear to me that the British Parliament, reflecting the views of the British people, does not want to see British military action,” Cameron said.  “I get that, and the government will act accordingly.”

While Obama's advisers argued Friday night in private that the humiliating defeat for Cameron starkly illustrated the risks of asking for congressional input, the president responded that the vote in Parliament demonstrated exactly why he should seek a vote on this side of the Atlantic, senior officials told NBC News.

And, the president insisted, seeking legislative backing was the approach most consistent with his philosophy.  While debate within the administration continued into late Friday, by Saturday morning the senior advisers acquiesced.

Speaking to the nation early Saturday afternoon, Obama said he was “mindful that I'm the president of the world's oldest constitutional democracy.  I've long believed that our power is rooted not just in our military might, but in our example as a government of the people, by the people and for the people.”

President Obama says the nation should and will take action against the Syrian government, but not without congressional approval. Watch his full speech.

The president also noted, “while I believe I have the authority to carry out this military action without specific congressional authorization, I know that the country will be stronger if we take this course, and our actions will be even more effective.”

White House aides said they are fairly confident that Congress will grant them the authority to launch a strike, although they maintain that Obama would be acting within his constitutional authority even if Congress rejects the authorization and Obama orders military intervention.

Congress is not scheduled to return to Washington for debate until Sept. 9. The administration decided not to call them back early due to the Jewish holidays this week, a delay that the Pentagon also signed off on, saying that the wait won’t diminish U.S. military capabilities in the region. There’s an upside to that cooling-off period too, aides said. The delay gives Obama time to make his case to Congress and to keep pushing for international support.

“Here's my question for every member of Congress and every member of the global community,” the president said Saturday.  “What message will we send if a dictator can gas hundreds of children to death in plain sight and pay no price?”

While the United States does not believe it needs military help in a strike, Obama will push allies for political backing when he attends the G20 summit in Russia next week.

Reaction from Congress was mostly positive in the hours after Obama detailed his position. A statement from House Speaker John Boehner other GOP leaders stated: “We are glad the president is seeking authorization for any military action in Syria in response to serious, substantive questions being raised” and noted Congress would begin debate when they return to Washington.  And House Democratic leader Nancy Pelosi said, "President Obama is right that the debate and authorization by Congress for action will make our country and the response in Syria stronger.”

But a key group of Syrian rebels who have been fighting the Assad regime reacted in surprise and anger to the decision.

"The death will continue in Syria because of the (failure of the) leadership of the United States to act decisively at this point," said Louay Safi, a spokesman for the Syrian National Council. "Obama had the moral responsibility (to) act and not waiver."