5,000 people fleeing the country every day 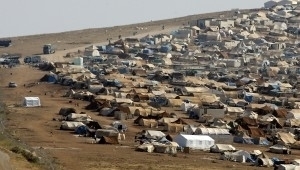 The number of Syrians who have fled abroad has now passed the 2 million mark, according to the latest UN figures, with an average 5,000 people fleeing the country every day.

There are also an estimated 4.25 million internally-displaced Syrians according to the report, making Syrian refugees the largest population of displaced people in the world.

In a statement issued on Tuesday, the UN High Commission for Refugees (UNHCR) said: “The war is now well into its third year and Syria is hemorrhaging women, children and men who cross borders often with little more than the clothes on their backs.”

“This trend is nothing less than alarming, representing a jump of almost 1.8 million people in 12 months,” the agency said, with less than 250,000 registered Syrian refugees in August of 2012.

The largest number of refugees have taken shelter in neighboring Lebanon, with over 700,000 registered refugees now resident in the country. According to the UNHCR, Turkey and Jordan are also each home to approximately 500,000 Syrian refugees.

The agency says the refugee influx is “placing an overwhelming burden on their infrastructures, economies and societies,” and that they required “massive international aid” to cope with the growing numbers.

Lebanon, the smallest of Syria’s neighbors, had a pre-war population of 4 million, while Jordan’s is only slightly larger, at approximately 6.5 million.

The report also says that 52 percent of the registered refugees are aged 17 or under, and follows a recent announcement by the UNHCR that the number of Syrian minors registered as refugees had passed 1 million.

The head of the UNCHR, António Guterres, said the crisis represented “a disgraceful humanitarian calamity with suffering and displacement unparalleled in recent history…the only solace is the humanity shown by the neighboring countries in welcoming and saving the lives of so many refugees.”

The report also warns that refugee relief agencies on the ground in Syria and its neighbors are also facing a serious funding shortfall, and currently possess only 47 percent of the funds necessary to meet the basic needs of refugees.

In response to the ongoing crisis, ministers from Iraq, Turkey, Lebanon and Jordan are due to meet with officials from the UNHCR in Geneva on Wednesday, in an attempt to intensify international efforts.