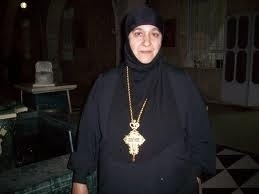 In her interview with LBC Satellite Channel, Pelagia denied any attack on churches and monasteries, countering a regime's account that rebel fighters had committed massacres, broken crosses, burned churches and abducted civilians.

Regime supporters used social networking sites, including Facebook, to deliver a poisonous message against Pelagia, circulating a statement that described her as a “terrorist” and “traitor” and said that she conspired with terrorists and misled Assad's forces to help the Free Syrian Army fighters in destroying Maaloula .

Regime loyalists also used Pelagia's Lebanese nationality to accuse her of working for Samir Geagea and claimed she was a close friend to Father Paolo Dall'Oglio, who was also described as a traitor.

The claims also said that Pelagia harbored terrorists in ancient houses to protect them, hiding their presence in the city for more than three months. It was claimed she cooperated with Sheikh Hosni Mahmoud Diab, a member of the Syrian parliament for the town of Maaloula, to prevent regime forces from entering the town.

Observers commented on the claims, saying that the Assad loyalists had unwittingly confirmed the real unity existing between Muslims and Christians, where the Priest and Sheikh put hand in hand to face the Assad regime and protect rebels.