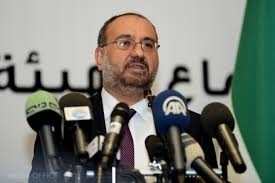 Dr. Ahmad Tomeh, the Prime Minister in charge of the formation of an interim government in Syria, said that “the one sided Russian-American agreement excluded the Syrian people, before anybody else, from any influence on the decision.”

Tomeh said during an interview with “Nuqtat Nizam” which is broadcast on the al-Arabia channel on Friday evening, which the Americans achieved two important points in this agreement. The first is disarmament of Syrian chemical weapons, which benefits Israel, and second, the reduction of the percentage of Iran's uranium enrichment from 20% to 5 %, which is the allowed percentage [for medical purposes].

Tomeh pointed out that many members of the National Coalition and the Syrian opposition retreated on the question of acceptance of the Geneva agreement, “though I personally had studied the agreement very well, especially the English version, and found good points in it in favor of the opposition.”

In answering how to deal with militant groups in Syrian territory, Tomeh said that the problem is their desire to impose their radical ideology on people by force.

He added that the deep intellectual problems led to where we are. “We want to continue the arguments and we do not want to shed the blood of people as they do.”

Dr. Tomeh said, “As long as the interim government succeeds in improving people's livelihood and providing services to them, the people will abandon the militant groups.”

He added that these groups do not have a social base yet, but with the passage of time, they will have access to this… and therein lies the problem.

Tomeh said that the State of Iraq and al-Sham is the most extreme [group], followed by al-Nusra Front. He added, “We differentiate between them… But we cannot deal with any of them for political and ideological reasons, though we can consider those who give up the radical ideas and accept the idea of dialogue.”