The Syrian Coalition held the Assad regime “responsible for this vicious crime.” 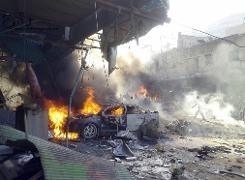 A car bomb exploded on Monday October 14, 2013 in a crowded marketplace in Darkush, Idlid, one day before the start of Eid al-Adha, killing nearly 22 people were killed, including women and children, and scores were injured, the Syrian National Coalition has said.

The Coalition condemned in a statement “this terrorist attack that targeted a liberated area where thousands of displaced families found refuge.”

“The terrorists deliberately chose to orchestrate their attack during a special time for many Syrians, when pilgrims spend their day on Mount Arafah, an important ritual of the hajj pilgrimage,” the statement added.

The Syrian Observatory for Human Rights said the toll was expected to rise due to the large number of people who suffered serious injuries, and that at least one child was among the dead.

Activists from the Syrian Revolution General Commission network told AFP that the blast took place in the market area of the Darkush, which is under rebel control.

The Syrian Coalition held the Assad regime “responsible for this vicious crime.”

The Assad regime, the Coalition said, “has continuously tried to create chaos and confusion among rebels and to take revenge on civilians in liberated areas.”

The Syrian Coalition called upon Islamic and Arab states to take all measures necessary to end the suffering of the Syrian people, including providing support to the Free Syrian Army in its fight to achieve justice, freedom and dignity.