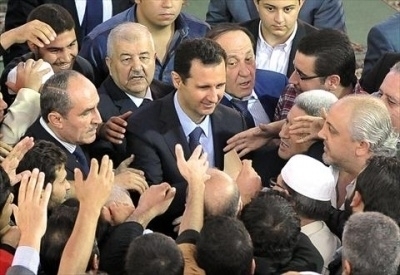 While the children of Ein Tarma,a town in the Damascus suburbs, were playing and celebrating the major Muslim holiday of Eid al-Adha, Bashar al-Assad’s warplanes struck the pubic square of the city, killing at least three children.

Pro-Assad social media pages said the attack against the rebel-held area was retaliation for several rockets that fell on the city of Jaramana, predominantly a Druze area, that caused the injury of two civilian women.

“The Ghouta region has a long heritage of rebellion and patriotism going back to the days of the French mandate. The towns there have played a big role in the uprising since it began in March 2011, drawing outrage and hatred from Assad, who wants to smash the revolution by any means—be they chemical, as demonstrated on August 21, or through a policy of starvation,” said a Damascus-based analyst to Zaman al-Wasl on condition of anonymity for fear of reprisals.

''So, targeting the rebels' children who have nothing to do with politics was deliberate because they are potential enemies for the Assad regime,'' the analyst added.