Role in intelligence gathering make kiosks the target of attacks 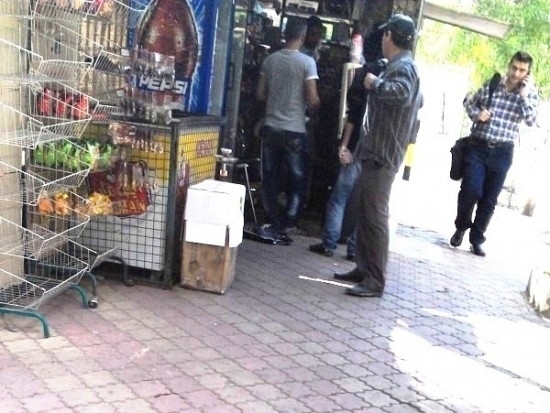 Kiosks stationed around the city of Damascus are considered one of the obvious methods of the regime to monitor suspicious movement and gatherings, explaining why they are the target of frequent attacksby the Free Syrian Army .

The task of these kiosks is to monitor movements, given they supply all items that young people want, from cigarettes, to drinks and even films.

Kiosks are opened as a small security branches, with a government official responsible for each. Sellers are provided with weapons hidden inside the kiosk or close by. They appear quickly whenever a problem occurs; suddenly security personnel and regime forces in civilian clothes surround the location.

One young man, "D", recalled a shooting incident at the al-Thawra bridge several months ago, that "surprised everyone when a large number of weapons and security men suddenly surrounded the Samiramis Hotel and the neighborhood."

Because of their participation in security operations, some of the kiosks have been targeted in attacks. In particular, the famous Mazzeh kiosk, which was blown up, killing many Shabbiha militiamen, or the kiosk of al-Qusur, which was taregted with an explosive device without causing casualties.

Security remains the main concern of the existence of all these stalls, rather than the supply of goods and services. This also explains the link between the owner of the kiosk to the security forces, especially those from the coastal areas.

Shops generally also provide a margin of safety, given their constant lighting and the presence of more than one person for different services. But in Damascus, they are just mini security atttachments to which security members return to at night, particularly those manning checkpoints or with other "national tasks".

The following morning, the areas around the kiosks carry the scent of wine and bottles are discarded carelessly, after the homeland security has done its duties in perpetuating fear among the people.