This photo of Ahmad al-Mahmoud was taken two months ago 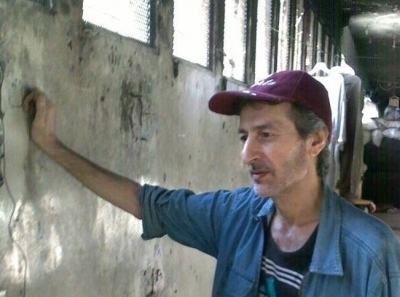 A former prisoner himself, Diab Seriyeh, is making an appeal to help save the life of Ahmad al-Mahmood, who has been in coma for three days in detention.

The appeal says Mahmoud has been suffering from back pain due to a because prolapsed disc and is unable to move, which has cause extreme deterioration in his weight and health. he now weighs 55kg as a result of the lack of medicine and food supplied by the Aleppo central prison.

The appeal added that Mahmood has been suffering from an abdominal tumor which has caused pressure on his stomach and caused difficulties in swallowing and digestion.

The prison administration has refused to facilitate an ultrasound imaging to diagnose Mahmood's medical condition accurately.

Mahmood has been detained since 1988 without charge. He was transferred from Mazzeh central prison to Palmyra, then Saydnaya, finally ending up in Aleppo’s central prison.

The appeal requests that activists and interested people to do their best to save Mahmood’s life.