As expected, Ahmad Jarba won the presidential elections for the Syrian National Coalition with 65 votes on Friday 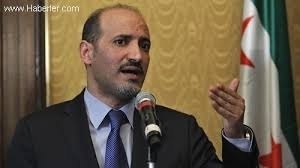 A furious battle was underway behind the scenes of the presidential election of the Syrian national Coalition, between defected former Prime Minister Riyad Hjab and Ahmad Jarba.

Hijab  surprised everybody with his nomination for the presidency just 24 hours before the elections, even before becoming a member of the Coalition.

Hjab nominated himself as a substitute for Abdo Hussam Eddin, the defected deputy Petroleum Minister, who resigned from the Coalition a week ago.

What emerged was a repetition of old Saudi-Qatari competition. However, the Qatari presence was more effective this time, with Qatari foreign minister Khaled al-Attiyah directly supervising Hijab's campaign.

Hjab did not lead the campaign himself, but met with Coalition members without discussing details, allowing deals to be made by businessman Mustafa Sabbagh, who has Qatar’s support.

There were rumors that both Jarba and Hjab have delivered “piles of money” to groups with the Free Syrian Army, representatives of the revolutionary movement, local councils and other groups.

The voting power of Michel Kilo’s bloc proved to be fake, as it voted according to its own benefit. Jarba’s political chancellor, Faiz Sara and his secretary Monzer Aqbiq maintained their positions by voting for Jarba, while Muaffaq Neirabieh and Riyad Saif voted for Hjab. Samira Masalmeh voted for Hijab just to challenge Michel Kilo.

The Jazeera mass, which consists of tribal leaders from the east of Syria, including Mohammad Dandal and Akram Assaf, voted to Jarba, while businessmen like Bassam Malik voted for Hijab.

The Free Syrian Army bloc was also divided, with 10 out of 15 members voting for Jarba, while the others, headed by the political and media spokesman of the Free Army, Louay Mokdad, voted for Hjab.

It is noted that the Turks did not interfere at all in the elections, and that they were not part of the Qatari maneuvers. Turkmen voted for Jarba, switching from Sabbagh.

Also noteworthy was the absence of Lebanese parliament member and Saudi-linked Uqab Saqr who didn’t communicate with the members supporting Jarba. Observers say that this is due to the financial problems faced by Saad Hariri, which has forced him to stop funding the military and political opposition. The same problems, in addition to his legal cases in Europe, forced him to cease paying salaries to some opposition figures.

The luckiest figures to emerge from the election were Walid al-Bunni, Louay Safi and Abdul Karim al-Bakr who resigned from the Coalition ahead of the most recent gloomy episode of Syrian democracy.

Turkmen Coalition member Ziad Hassan said that at least 40 members resigned from the Coalition (including himself). The members will explain the reasons of their resignation in a statement on Tuesday.