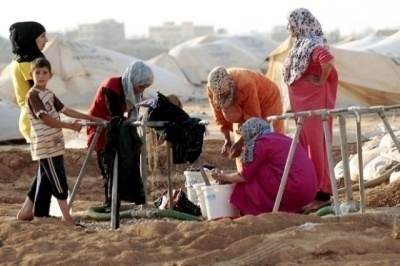 Young girls are being exposed to all sorts of dangers in an open and closed societ like Zaatari Camp in Jordan.

The main threat is  the spread of psychological disorders among the refugees, as well as increasing sexual abuse cases.

Statistics issued by Jordanian General Security Directorate show that the number of sexual abuse against women and children cases has reached 10 during 2013.

This situation imposes harsh responsibilities onparents, especially if they were injured or handicapped.

Mahmoud Idriss is an injured Syrian refugee who says he has suffered a lot to protect his three children, two of whom are minor girls.

"I couldn’t allow any of my girls and wife to go outside the tent, because there are hooligans outside", Idriss said.

"I suffered a lot, and you can see that my back is injured."

Mouna al-Zoubi, 10,  lives among a family that has three handicapped members, which made protecting herself, her brothers and sisters difficult.

"My mother, father and younger brother cannot talk or hear, me and my other brother is the only healthy member of the family," Mouna said.

Nonetheless, her parents use sign language to tell her "not to go outside the tent and to come back before 2 pm, because ther are hooligans in the camp," Mouna said.

"Protecting the children, especially minors, is the responsibility of parents in the first place," said the Syrian refugee Abdulsalam al-Khudair.

He said he believes that because Syrian refugees are not living in their original environment and familiar communities, children can be exposed to troubles.

"Their parents have to control them and instruct them that any society has its positives and negatives. Parents should take care of their children. Being cautious is natural in a strange society that differs in its customs and traditions," he said.