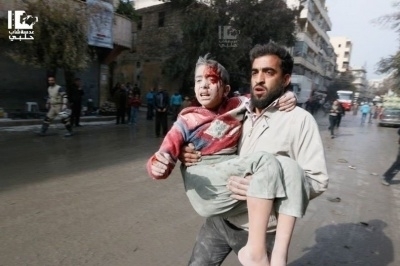 The fighting came even as both sides reported "positive" results at peace talks in Geneva after four days of deadlock.

A woman and a young girl were among the dead when government helicopters dropped the controversial munitions on the Maadi district of south Aleppo, the Observatory said.

Barrel bombs were also dropped on the nearby Salhin neighborhood, the Britain-based group added, without having any immediate word on any casualties.

Government forces have launched an offensive to the southeast of Aleppo, Syria's pre-civil war commercial capital, aimed at securing the international highway and expanding their area of control around Nairab airbase, security sources said.

The offensive has already won them their first gains in the area in more than a year, with the capture of the Karm al-Qasr district on the city's southeastern fringes, the Observatory said on Tuesday.

Elsewhere in Aleppo province, clashes erupted between rebels and fighters of the jihadist Islamic State of Iraq and the Levant in the town of Al-Bab.

And near Krak des Chevaliers, government forces launched four air raids on the town of Zara, in an area where fierce battles with rebels left 26 people dead on Tuesday, the Observatory added.